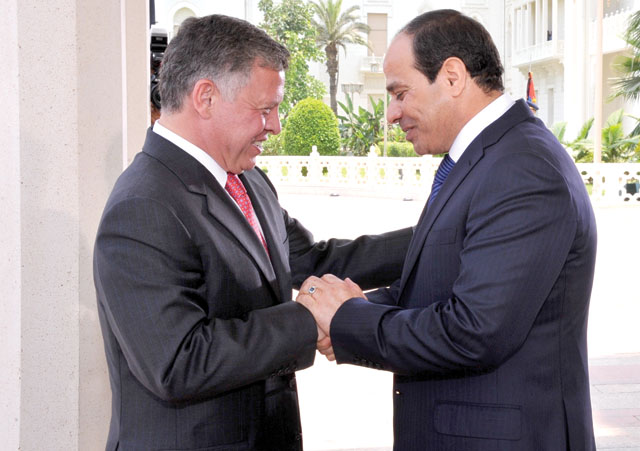 King Abdullah’s visit to Egypt has ended with both states hoping to reinforce their bilateral cooperation. High on the agenda was terrorism and security related issues. A plan to build a natural gas pipeline from Iraq to Jordan that will also provide Egypt with gas to generate electricity was also announced.

Both countries are strongly engaged in fighting terrorism on different fronts and they have highlighted that Arab and Islamic countries as well as the international community should stand against extremism and terrorist organizations. A released video by ISIS purportedly showing captured Jordanian pilot being burnt alive led to an outrage of the government in the Hashemite Kingdom and similar sentiments were felt by the Egyptian government when a Libyan based ISIS affiliated group showed the killing of 20 Egyptian Christians.

Presidential spokesman Alaa Youssef said military and security cooperation between them will be strengthened and a joint working group that will develop a common framework to address regional challenges is expected to be established.

The two leaders called for a comprehensive political solution to the Syrian crisis and an enhancement of security and stability in Iraq. ISIS is present in these countries and declared the territory under its control as an Islamic State.

The war in Libya between the rival governments was reviewed and the necessity for the revival of peace talks between the Palestinians and Israelis was also underlined. International stakeholders were urged to overcome the obstacles and create a convenient atmosphere for talks to begin in accordance with the two-state solution and international legitimacy resolutions. In December, an Arab backed draft resolution presented by Jordan at the UN Security Council for an Israeli withdrawal deadline on Palestinian occupied territories failed to amassed the required votes.