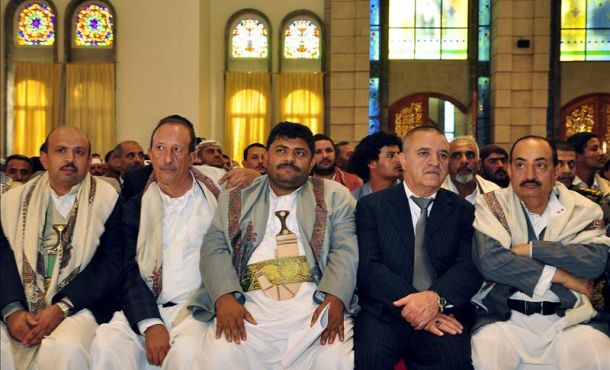 Abdel-Malek al-Houthi, leader of the Houthi movement, stressed on the rebel group’s own al-Masirah TV network that they will not bow down to “pressures” before warning that “whoever harms the interest of this country could see that their interests in this country are also harmed.” Abdul-Malek didn’t accuse any group or country of being trying to put pressure on the movement but the broadcasting of his speech which coincided with the U.S halting the operations of its embassy in the country has forced observers to think that they could be linked. Last week, the Houthi leader blasted reported plans by foreign governments to remove their diplomats as amounting to unwarranted useless pressures. On Tuesday, the Houthi rebels increased the area under their control after they took over the important central province of Bayda, the gateway to the country’s mostly Sunni south. The Revolutionary Committee, a panel of top security and intelligence officials loyal to the group, is governing the country after the parliament was dissolved last week and the president continues to be confined to his residence.

Abdul-Malek said the stability of Yemen is “in the interest of every power, domestic and foreign,” because of its strategic location and rich resources that are yet to benefit the population. UN has started multi-party talks with the hope to form a transitional agreement acceptable by both the Sunni majority and the Shite minority. The Houthi movement claims that it wants a fair share in ruling the country.

Meanwhile, sources have disclosed that the American embassy will be temporarily closed and the staff will be evacuated but military forces that are on the ground to fight against terrorism will remain in the country.