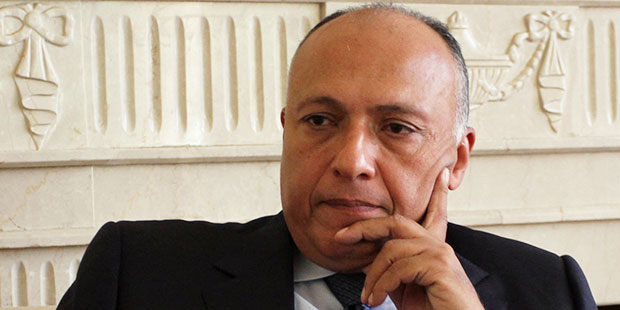 Egypt’s Foreign Minister Sameh Shokry lamented that despite the reconciliation efforts between Cairo and Doha that were facilitated by the late King Abdullah of Saudi Arabia, Al-Jazeera TV channel is still broadcasting reports that are not in concordance with Arab brotherhood. Qatar shut down Al-Jazeera Mubasher Misr, a subsidiary of Al-Jazeera dedicated to Egyptian affairs, in December to ease tensions between the two countries.

Shokry’s statement was made a day after it was claimed that the leaders of the Muslim Brotherhood who were expelled from the Gulf state to bridge the differences with Egypt will be returning to Qatar soon.

Shokry said Egypt has always promoted “good faith with Arab brethren on the basis of distinctive relations, and does not harm anyone” but Al-Jazeera reports continue to cast doubt on the country. He made these remarks during an appearance on Tahrir TV.

Egypt is not pleased with the latest Al-Jazeera broadcasting that showed bomb explosions in the country during the January 29 attacks while voices were heard seemingly cheering. Cairo has repeatedly accused the channel owned by the Qatari monarchy of being biased towards the banned Muslim Brotherhood and of airing false reports. Three Al-Jazeera journalists have been jailed in Egypt for months. Only one of them, Peter Greste, was freed on Monday.

Meanwhile, the Brothers Without Violence movement claimed that there will be a change in Qatar’s foreign policy after the death of the Saudi king and that several leaders of the Muslim Brotherhood who were asked to leave in September last year will be welcomed back in Qatar.

These include secretary general of the Muslim Brotherhood Mahmoud Hussein, spokesperson for Freedom and Justice Party Hamza Zawba, as well as Essam Talima, the office director of Sheikh Yousef al-Qaradawi.

Qatar’s relations with several countries, including with some Gulf States, soured in the wake of the Arab Spring because of Doha’s alleged support to Islamist movements.