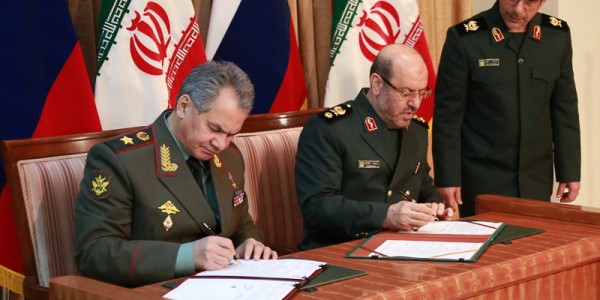 Iran and Russia have signed lately a military cooperation agreement to enhance further their counter-terrorism ties, exchanges of military personnel and coordination between the two countries navies.

According to the Russian defense minister Sergei Shoigu, the Kremlin wants to build a long-term and multifaceted military relationship with Teheran.

His Iranian peer Hussein Dehghan called for a greater cooperation with Russia to stand up to the Americans in the region as the two countries (Russia and Iran) are staunch supporters of the Syrian President Bashar Al-assad, while the United States advocates regime change and supports rebel groups.

Iran and Russia are two neighbors who share common viewpoints toward political, regional and global issues.

Russia has maintained friendly ties with Iran and has built its first nuclear power plant and is planning to build two more reactors in Iran.

However relations between the two countries hit lately a snag over a deal of an arms’ sale that includes a sophisticated air defense missile system Russia was supposed to deliver to Iran.

The Russians have signed in 2007 a $ 800-million contract to sell the Iranians the S-300 missile system, but the weaponry was never delivered due to strong opposition from Washington and Tel Aviv.

Iran has filed a lawsuit with a court in Geneva seeking $4 billion in damages over the breach of the contract, but the court hasn’t yet made any ruling. Russia has insisted that its decision to freeze the S-300 delivery was based on the United Nations Security Council’s sanctions against Iran.