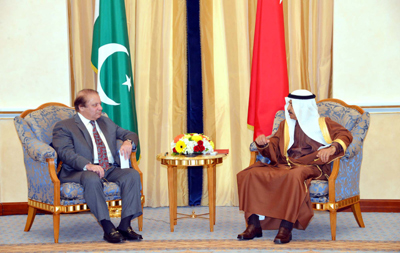 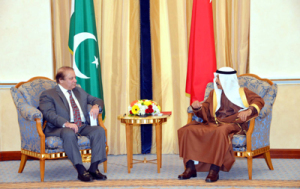 Talks between Bahrain and Pakistan have ended with both parties agreeing to further bridge their economic and trade activities by signing several agreements. They will also be reinforcing their defense cooperation as Pakistan’s Prime Minister, Nawaz Sharif, said the security of the two countries is inseparable. The meeting between the Prime Ministers was held in Manama at the Gudaibiya Palace.

The two governments are planning on setting up a joint ministerial panel that will facilitate the implementation of the agreements signed during King Hamad’s last visit to Pakistan. The oil and gas sector will be given a lot of attention.

Bahrain and Pakistan have pledged to bolster security and military co-operation to combat the scourge of terror in order to promote global security and stability. It is in accordance with their zeal to promote financial and banking cooperation that will support strong economic partnerships between their private sectors. A protocol modifying an agreement to avoid double taxation and fiscal evasion was signed as they aim to increase the volume of trade exchanges and joint investment ventures between them. The agreement was welcomed by the private sector.

The visit of Nawaz was described by his Bahraini counterpart, Prince Khalifa, as a catalyst which would bolster bilateral relations. In order to ease the movement of the officials between the two governments, bearers of Bahraini special diplomatic passports and Pakistani official diplomatic passports will be exempted from short-term residence visa.

Prime Minister Prince Khalifa hailed the Pakistanis living in Bahrain for the role they play in revitalizing the economy and supporting development efforts. Memorandums of Understandings were signed in cultural, environmental and educational aspects.

Ah the end of his visit, Sharif invited Khalifa to visit Pakitan