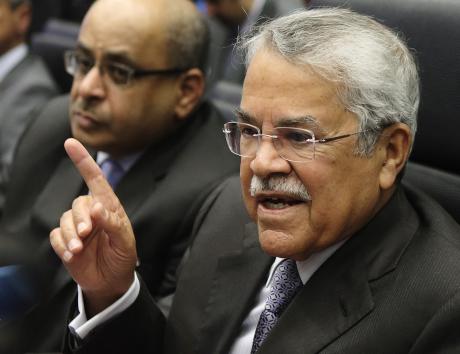 Riyadh and Abu Dhabi have backed the decision made by the OPEC to maintain the current levels of production, and blamed speculators and producers outside the cartel for the fall in prices. During the past six months, oil prices have nearly dropped 50 pc, with the international benchmark Brent crude falling below $ 60 a barrel last week, the lowest in more than five years.

The Saudi oil minister Ali al-Naimi said:”the kingdom of Saudi Arabia and other countries sought to bring back balance to the market, but the lack of cooperation from other producers outside OPEC and speculation led to the fall in prices.”

During its latest meeting, the OPEC has agreed to keep its target output of 30 million barrels a day unchanged. Saudi Arabia is the largest producer in the Cartel which controls about 40% of the global oil market.

For his part, the UAE’s oil minister Sohail Bin Mohamed al-Mazrawi blamed “the irresponsible production of some producers from outside OPEC for the fall in oil prices”.

Kuwaiti oil minister Ali al-Omair also said there is no need for OPEC to cut production or hold an emergency meeting before its next scheduled talks in June, while Iraq said the cartel would have to “wait and see” whether it was right to keep its output unchanged.

According to some analysts, the world is expected to need less OPEC oil in 2015 because of the increasing supply of US shale oil and other sources, with no significant rise in world demand expected.

The drop in oil prices has fuelled some conspiracy theories, including suggestions that Riyadh is seeking to damage the US fracking industry or looking to undermine Iran and Russia in response to their support for Syria.

Russia, which is the world’s second-largest oil exporter after Saudi Arabia, also refuses to cut production.