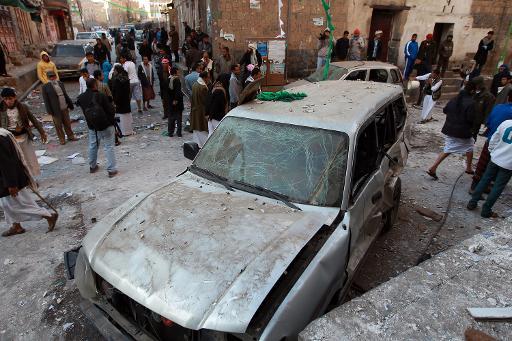 Multiple explosions have been heard in the Yemeni capital Sana’a. They took place in neighborhoods were most of the residents are supporters of the Houthi rebels. No one has claimed responsibility but it is believed that the bombs could have been planted by Al-Qaeda. In a separate incident, prominent Houthi figure, Faisal Sherif, was killed in a drive-by shooting. The attack highlights the tension that still exists between the different armed factions in a country where the government seems to be losing control. The attacks seem to targeting key figures in the rebel Houthi movement or those that are close to it. The explosions took place in the morning when there were few people in the streets. Two people lost their lives. Houses close to the explosions and cars were also damaged.

The Director General of the Sana’a police, Brigadier General Abdelrazzaq al-Mo’ayad said one of the explosions is believed to have been targeting professor Ismail al-Wazir of Sanaa University after it was placed near his home. He is still alive. The professor did escape an attempt on his life in April by gunmen although his two bodyguards didn’t. Wazir is close to the Houthi rebels.

The rebels are from the northern part of the country and have been reluctant to leave the capital after taking over several government buildings. They have faced little resistance from the government forces but have been engaged in confrontations with al-Qaeda and allied tribesmen.

The instability in Yemen has raised fears that the country, next to oil-rich Saudi Arabia and key shipping routes from the Suez Canal to the Gulf, could become a failed state along the lines of Somalia. The southern part of the country has also been intensifying its independence demands.