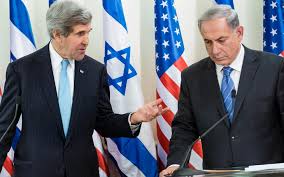 Ahead of the submission of a Palestinian-drafted resolution to the 15-member Security Council calling for Israeli occupation of Palestinian land to end by November 2016, Israeli Prime Minister Benjamin Netanyahu has met with U.S Secretary of State John Kerry in Rome to seek for Washington’s support. Tel Aviv needs Washington’s backing as European countries begin to change their approach towards the Israeli-Palestinian conflict. Netanyahu economized his words after the meeting. He said Israel is expecting the U.S to maintain its 47year old position on the matter which calls for negotiations to end the conflict. “I do not see a reason for this policy to change,” he said.

U.S officials have hinted that it is too early to make a decision regarding the Palestinian draft because some issues are still fluid. However a senior state official pointed out that Washington has always maintained that there are certain things it could never support and that has been made clear during negotiations although the official declined to state them.

A source with information about the talks between Netanyahu and Kerry said the Israeli Prime Minister sought for assurance on U.S vetoing any resolution setting a time frame. Kerry will meet with Palestinian chief negotiator Saeb Erekat and a delegation from the Arab League in London. He will also discuss with counterparts from Britain, Germany and France about their draft to end the Israeli-Palestinian conflict.

Wasel Abu Youssef, an official of the Palestine Liberation Organization, the highest decision-making body in the state, led by President Mahmoud Abbas said regardless of U.S position on the matter, the decision has been made to present the Palestinian-Arab resolution in the Security Council on Wednesday.

Jordan has already distributed the draft resolution among the member council of the Security Council.