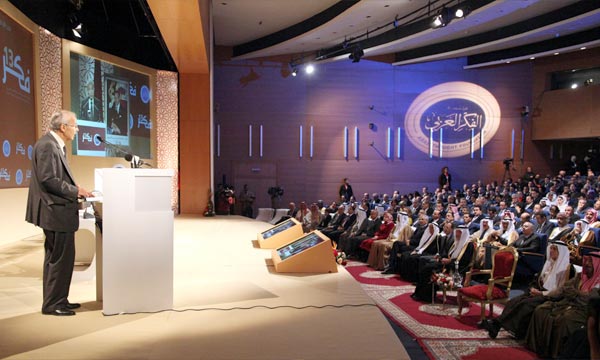 The 13th FIKR Conference, sponsored by the Arab Thought Foundation, has called for reactivating the Arab Peace Initiative, a comprehensive peace initiative that was first proposed in 2002 but that was rejected by Israel. The Conference, held in the outskirts of Moroccan capital city Rabat November 3 to 5, proposed the adoption of a non-governmental plan of action to reactivate the Arab Peace Initiative unanimously supported by Arab states as likely to settle the Israeli-Palestinian conflict and put the stalled peace process back on track.

The Initiative put forward in 2002 by the then-Crown Prince, King Abdullah of Saudi Arabia, proposes normalizing relations between the entire Arab region and Israel, in exchange for a complete withdrawal from the occupied territories (including East Jerusalem) and a “just settlement” of the Palestinian refugee crisis.

The Conference, held under the theme “Arab integration: the dream of unity and the reality of division,” also called for the reform of the Arab League to enable this institution and its member states take up the various challenges facing the region, particularly in this current juncture marked by instability, crises and divisions.

In a message he addressed to the Conference, King Mohammed VI of Morocco pointed out that the growing challenges in the Arab world and beyond require to be addressed “from a new, realistic angle” and that the current situation requires the promotion of complementarity which has become “an urgent necessity.”

The King who deplored that some Arab countries “are wasting their peoples’ resources on fictitious causes and artificial disputes which fan the flames of disunity and separatism,” pointed out that “although Arab countries have, for decades, sought to lay the groundwork for integration as a first step towards unity – signing, to this end, several agreements and announcing bold decisions at various conferences – results have been disappointing, falling well short of official and popular aspirations.”

“Nevertheless, Arab unity is not an unattainable dream, nor is it a shimmering mirage. It is a legitimate aspiration which can be fulfilled, it is also a strategic necessity to which everyone is called upon to give substance,” he said.

After he underlined that Arab states are facing development and security challenges as well as pressing popular aspirations for further rights and freedoms, and greater human dignity and social justice, the King said these challenges and aspirations can only be addressed through complementarity, unity and integration, and through inter-Arab reconciliation, unity of stances and consolidation of Arab joint action, “making sure the sovereignty and territorial integrity of our States are respected.”

Morocco’s King also stressed the key role of economy in consolidating Arab unity and achieving integration for development. “This is the basis for building an influential Arab bloc at regional and international levels,” he insisted.

In an echo to the royal message, participants stressed the need to achieve integration and to promote inter-Arab solidarity and to join efforts to fight extremism and terrorism which endanger the whole Arab region and beyond and also to take up the economic and military challenges thrown by Israel through enhancing regional cooperation and setting up regional blocs.

They likewise underlined the necessity to strengthen further Arab-African economic, strategic and cultural ties, knowing that two-thirds of Arab States are located in Africa and that the continent hosts a large Muslim community.