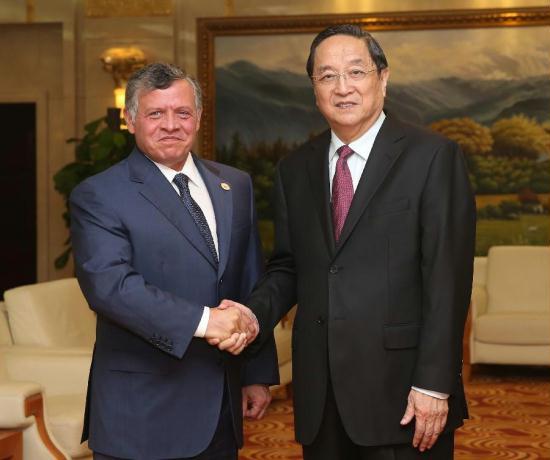 Chairman Yu Zhengsheng of the National Committee of Chinese People’s Political Consultative Conference (CPPCC) visit to Jordan has marked the end of his tour in the Middle East and North Africa after visiting Algeria, Morocco and Bahrain. Yu arrived in Jordan on Sunday and met with different authorities and also had an audience with King Abdullah. His visit is also part of China’s effort to promote the Silk Road Economic Belt and 21st century maritime Silk Road initiatives proposed by Beijing. Yu hailed Jordan as a key partner for cooperation in the Middle East after 37 years of bilateral diplomatic ties and also acknowledged its role in regional affairs and capability of maintaining stability and economic development. He added that Beijing is ready to work with Jordan in supporting the just cause of the Arabs and promote the peace process in the Middle East in order to boost regional peace, stability and development.

King Abdullah welcomed Yu’s remarks and hopes to benefit from the China’s experience in rail construction, oil exploration and renewable energy technology. The king stressed that repeated Israeli violations could jeopardize peace and security in the region. He urged Chinese firms to increase their participation in vital Jordanian projects for mutual benefit.

Jordan is hoping to reinforce cooperation and strengthen exchanges between legislative and consultative bodies.

Chairman Yu said that China will like Jordan to play an active role in the cooperation of the Silk Road Economic Belt and 21st century maritime Silk Road as they make efforts geared towards encouraging Chinese firms to invest in Jordan. He described the venture as win-win cooperation.

The two sides have agreed to deepen all-round cooperation and work together to promote the peace process in the Middle East.