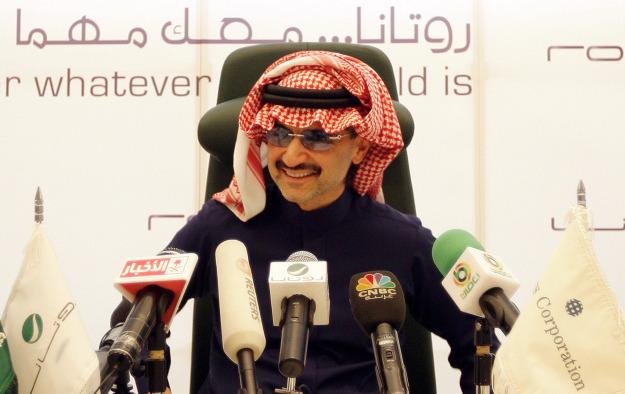 Outspoken Saudi Arabian billionaire prince, Alwaleed bin Talal, has warned Saudi Arabia to revisit its policies due to the continuous falling of oil prices. Oil producing nations that have their economy primarily based on oil for income are facing a dilemma after the systematic fall of prices since June. The IMF has also given similar warnings. Global oil prices started falling drastically yesterday when news broke out that “Saudi Arabia cut its selling price to the US possibly in a bid to compete with US shale oil.” It led to Brent North Sea crude dropping to $82.02, its lowest level since 2010, before slowly rising. The benchmark US crude price hit a three-year low of $75.84 today before recovering slightly.

The Prince said that Riyadh will need “an active sovereign wealth fund and to put in it all the excess foreign exchange that you have, all the money you have, and have it earn somewhere between 5 to 10%” if prices continue to head down.

Prince Alwaleed described Saudi Arabia’s dependence on oil as “wrong” and “dangerous.” He said that “the fact that the price of oil went down to below 80 proved that we were correct by asking the government to have other sources of income.” 90% of the income generated by the kingdom is from oil and is also the biggest producer in the Organization of the Petroleum Exporting Countries (OPEC).

OPEC coordinates and unifies the petroleum policies of its 12member Countries and it will be having a key production meeting on November 27 at its headquarters. Gulf States will be immensely concerned especially after Christine Lagarde of the International Monetary Fund (IMF) stated that oil-dependent Gulf States will face budget shortfalls if the prices continue to fall.