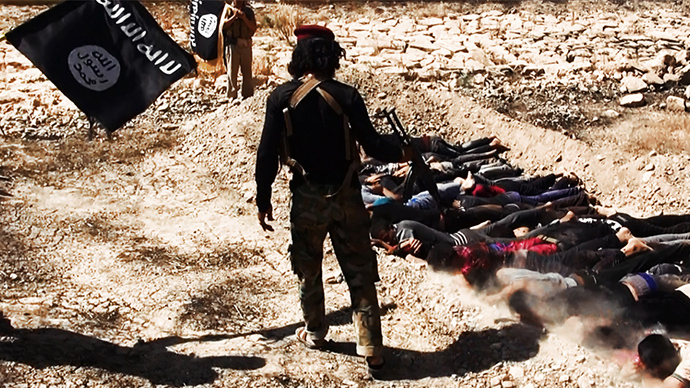 Islamic State militants have killed 322 members of an Iraqi Sunni tribe in western Anbar province. Among the slaughtered victims, there were dozens of women and children whose bodies were dumped in a well, say the Iraqi government. This mass murder committed in Albu Nimr tribe is the worst bloodshed in Iraq since the Sunni extremists swept through the northern region of the country with the aim of establishing medieval caliphate stretching from Iraq to Syria.

The Al-Bu Nimr tribe had joined the Iraqi government campaign against IS in Anbar, much of which is now under jihadist control.

This tribe, also Sunni, stood up against Islamic State for weeks before running out of ammunition, food and fuel, giving the upper hand to the Islamists extremists.

One of the leaders of the Al-Bu Nimr tribe Sheikh Naeem al-Gaoud said “we asked the central government and army to provide us with arms but no action was taken”.

He also said his men were hunted down while trying to escape from Islamic State, shot dead execution-style and dumped near the town of Haditha.

Prime minister Haider al-Abadi had ordered air strikes on Islamic State targets in response to the killings. The Iraqi security forces, backed by US-led air power, are planning a major offensive against IS fighters who have poured into the country from Syria.

According to US officials, the long-term goal of the operation is to break the IS occupation in northern and western Iraq, and establish the Iraqi government’s control over Mosul and other population centers.