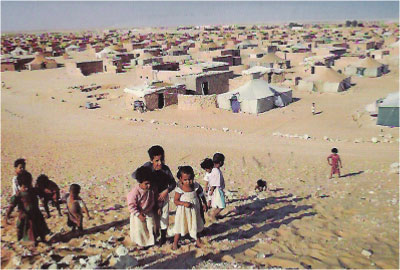 Human Rights Watch presented on Saturday in Algiers a 94-page report on the situation of human rights in the Tindouf camps located in south western Algeria, denouncing a number of abuses and outdated practices. The HRW scathing report mentions several forms of human rights violations in these camps such as slavery, trial of civilians before military court jurisdictions, politically motivated detentions, forced disappearances, hindrances to political activism, and torture or physical mistreatment of people in the Polisario’s custody among other abuses.

The human rights defense organization urged the Polisario Front to end military court jurisdiction over civilians and to redouble its efforts to eradicate all vestiges of slavery.

The NGO likewise called Algeria which is hosting on its territory the Tindouf camps to acknowledge its responsibility regarding the respect for human rights in these camps and make sure that the perpetrators of abuses are held responsible.

The report “Off the Radar: Human Rights In the Tindouf Refugee Camps,” one of the most detailed studies of the subject by an international human rights organization, is the result of a two-week research mission to the camps in late 2013, and is HRW first update on the human rights situation in the camps since 2008.

The reason for the scarcity of reports on the situation in the Tindouf camps is that Algeria repeatedly turns down any requests by international NGOs or even UN bodies to visit the Tindouf camps, conduct a census of the camps populations or meet these populations. Only pro-Polisario activists and associations are welcome any time.

The Tindouf camps are administered by the Algeria-backed Polisario Front, which seeks the independence of Western Sahara, a former Spanish colony retrieved by Morocco in 1975. Some of the refugees have spent four decades in these remote refugee camps in the Sahara desert near the Algerian city of Tindouf.

Among the violations found by its searchers, HRW mentions the difficulties facing the refugees traveling through Algeria outside of Tindouf and the limits to the freedom of speech, association and assembly. HRW says in this vein that “few dissident groups appear to have formed in recent years,” that there are “allegations of occasional efforts by authorities to curb political activism” and that “the Polisario monopolizes political discourse in the camps.”

“Opposition to its fundamental goal of political self-determination for Western Sahara is rarely heard,” concedes the NGO.

The self-determination idea was floated in the early 80s and Morocco proposed a referendum on the option. But the proposal proved unworkable as asserted by many pundits and even by UN officials involved in the project.

Morocco has proposed an autonomy plan for the disputed territory in 2007 to bring out the UN-sponsored settlement process from the deadlock but the Polisario and its Algerian mentors stick to the self-determination option. As the deadlock continues, the prospects of a lasting settlement and the return of refugees to their homeland remain elusive, as stated by HRW.

HRW underlined that the Front should ensure that camp residents are free to challenge its policies and leadership peacefully and to advocate options other than independence for Western Sahara.