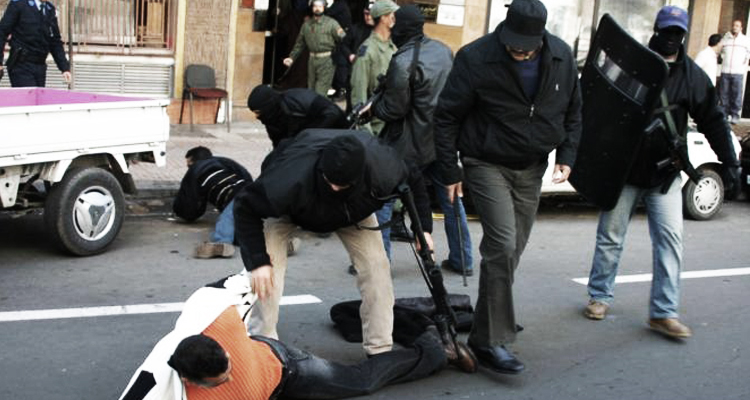 A Moroccan national settled in France was arrested on Wednesday at the Casablanca international airport while he was about to fly to Turkey wherefrom he was planning to join the Islamic State group, it was officially announced by Moroccan authorities The man, who had been earlier arrested in France and placed under judicial control, succeeded to elude the vigilance of the French border police and left the European country with his two young French daughters, 4-year old and 2-year old, reportedly leaving his legal French wife behind.

When he returned to Morocco, he entered into a customary marriage with a young Moroccan woman and started preparing his journey to Turkey, a major transit point for the Jihadists seeking to join the IS group.

He set the journey for October 15 and headed to the airport with his kids and his new wife. But he had not reckoned with the Moroccan security forces which were keeping an eye on him as they were aware of his relationship with a terrorist cell dismantled last August 14. According to the Moroccan Interior Ministry, the cell was recruiting combatants for terrorist groups in Syria and Iraq and “was in close contact with extremist leaders of the Daech terrorist group.” Seven members of the cell had been then arrested.

Morocco has been staging a tireless combat against terrorism since it was targeted by a terrorist attempt in 2003 and dismantled ever since several terrorist cells, including many over the past few months. It has also tightened controls at airports and along its borders and strengthened anti-terrorism legislation to fight the recruitment of Moroccan Jihadists. The amended law provides for heavy penalties ranging from five to fifteen years in prison and fines of up to $60,000 for any Moroccan who joins or tries to join armed organizations inside or outside Morocco. According to Moroccan authorities, over 2000 Moroccan Jihadists, some of whom holding a dual citizenship, are participating in the fighting in Syria and Iraq.

The efforts made by the Moroccan security and intelligence services enabled to thwart many domestic terrorist plots and the country’s contribution to anti-terrorism struggle at the international scale, mainly through intelligence sharing, proved crucial in foiling several terror plots against friendly countries.