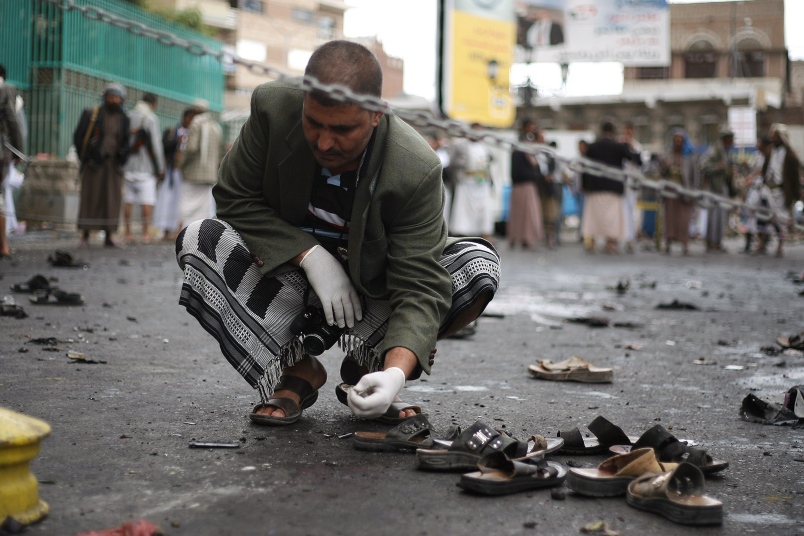 Nearly 70 people were killed Thursday in twin suicide attacks, one targeting Houthi rebel gathering in Yemeni capital Sanaa, while the other an army outpost in Hadramawt. At least forty-seven people were killed and 75 others wounded in the capital Sanaa when a suicide bomber detonated his explosives targeting Houthi supporters who were preparing to hold a rally to celebrate the resignation of Prime Minister Ahmed Awad Mubarak under the pressure of the Shia Houthis, the opponents of the central government who control some parts of Sanaa.

In another deadly attack, at least 20 government soldiers were killed in a suicide car bombing and gun attack in the eastern Hadramawt province.

These blasts are believed to be politically-motivated as they occur a day after the PM picked by Yemeni President as part of a UN-brokered peace deal, turned down the offer as Houthi rebels had rejected his nomination.

The Houthis want a new government led by an independent Prime Minister and insist to have a say in the composition of the government. They deployed hundreds of fighters in the capital and threatened to extend their civil disobedience campaign, prompting the fears among Sunni population that the group wants to seize power.

These attacks raise serious fears in the region that Yemen may slip back again into sectarian violence and chaos, a situation which will serve only the interest of Al Qaeda, Islamist militants and extremists of the Islamic State.