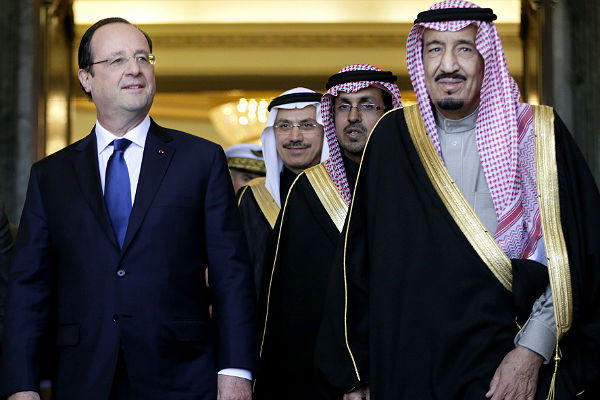 Following a four-day visit by the Crown Prince Salman of Saudi Arabia together with the deputy premier and minister of defense to Paris, the French Ambassador to the Kingdom Bertrand Besancenot has revealed that a high-ranking delegation of French officials will soon be visiting Riyadh. King Abdullah and President Hollande met each other last year. The outcome of that meeting was described by the Ambassador as a move towards a “strategic level” that will enrich the Saudi-French partnership. The French ministers of defense and economy are expected to be part of the delegation. Underlining the important political, economic and cultural ties that the two countries share, Ambassador Besancenot believes that the visit will only strengthen the existing excellent relations between them.

There was a 30% increase in the number of Saudi tourists vising France last year. The number is expected to continue rising. Saudi students in France are around 1,500 but the signing of 70 agreements with French universities for various educational programs will contribute immensely to increasing their numbers.

In 2013, bilateral trade between them stood at €9,4billion. French exports to the Kingdom were worth €3,4billion and Saudi exports to France €6billion, mainly in oil and petrochemical products. France accounts for 3% of Saudi Arabia’s market and it is its eighth biggest supplier. It is the third largest investor in Saudi Arabia, with a total investment of $15.3 billion. 70 French firms can also be found in the country.

Besancenot said Riyadh and Paris share the same ambition of fighting against terrorism worldwide and to maintain peace and stability in the Middle East.

The two governments are planning a couple of joint activities that will enable them to discuss every aspect of the strategic partnership, the Ambassador concluded.