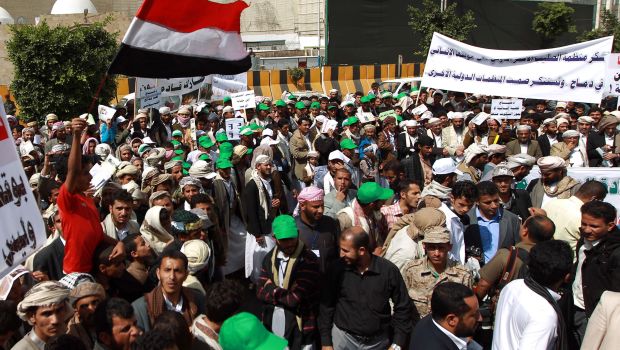 The call of Abdul Malik al-Houthi, a senior Houthi leader, for a massive parade against a failed government received a positive response on Monday as thousands occupied the Change Square in the capital chanting anti-government slogans. The protest by the Houthi movement is expected to raise the eyebrows of the authorities because the movement played a principal role in forcing President Ali Abdullah Saleh to leave power in 2012. Yemen’s Houthi movement drew its name from the tribe of its founding leader, Hussein Badreddin al-Houthi. Abdul Malik al-Houthi gave the government an ultimatum on Sunday when he was urging people to protest. He said the government should leave office before Friday or satisfy the grievances of the people. Al-Houthi warned that they will use other types of “legitimate action” if the need arises as he hinted that they will erect tents, carry out sit-ins and organize marches in Sana’a to assure “the fall of the government, which has failed.”

Alongside the claims of a failed government, protesters are also motivated by the recent increase of petrol prices, severe energy crisis including frequent power cuts and fuel shortages. The government’s decision to peg petrol prices at 4000 Yemeni riyals per 20 liters from 2500 is very unpopular. Chants against the gasoline tax increment which took place in July were also heard.

The protests are expected to continue during the week after Al-Houthi hinted that “we won’t stand with folded arms in the face of crime.” However, it could also lead to tensions rising between the Shias and the Sunnis. Shia fighters often blame the government for the political, economic, and religious marginalization of the country’s Shia community and violating their civil rights.