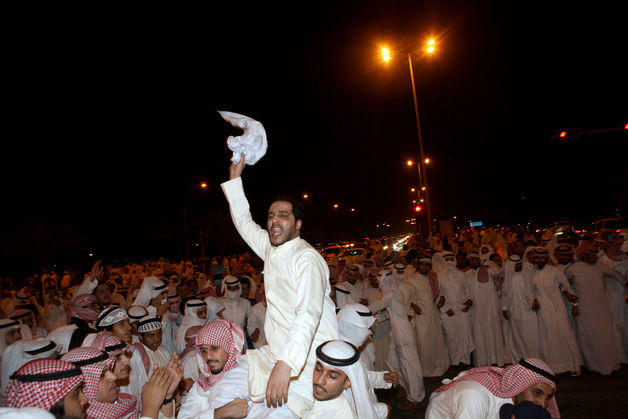 Kuwaitis political crisis have caught flames once more after the arrest of opposition leader Mussalam Al Barrak. Supporters of Al Barrak have flooded the streets and clashed with the police for the past four nights prompting Emir Sheikh Sabah Al Ahmad Al Sabah to hold consultations with the Crowned Prince and the Prime Minister. The opposition leader is to be tried on Monday and the Interior Minister has warned that unlicensed will be dealt with accordingly.
The past several years have been engulfed by political crisis. Most opposition groups are not represented in parliament after boycotting a July 2013 election in protest at Kuwait’s amended electoral law.
Al Barrak was arrested and detained on allegations that he insulted the Judiciary arm of the government and slandered Faisal Al Marshed, the head of the supreme judicial council. Reports stated that Al Barak also accused former senior officials, including ruling family members, of embezzlement, theft and money laundering during a public rally in June.
His supporters claim that his arrest and trial are “politically motivated” and are determined to continue protests for his release. A statement from the Interior Ministry urged the protesters to abstain from violence after unidentified men amongst them threw a petrol bomb at the jail where opposition leader Mussalam Al Barrak is being detained. Several protesters have been arrested by the police.
Emir Al Sabah called on everyone “to comply to preserve the country’s security and stability.” After being briefed by the Prime Minister, “of the events that violate the constitution and the law,” the Emir strongly defended the Judiciary and urged for the respect of laws.
The Interior Ministry is preparing to maintain public order as opposition supporters’ brace to protest when Al Barrak appears in court.