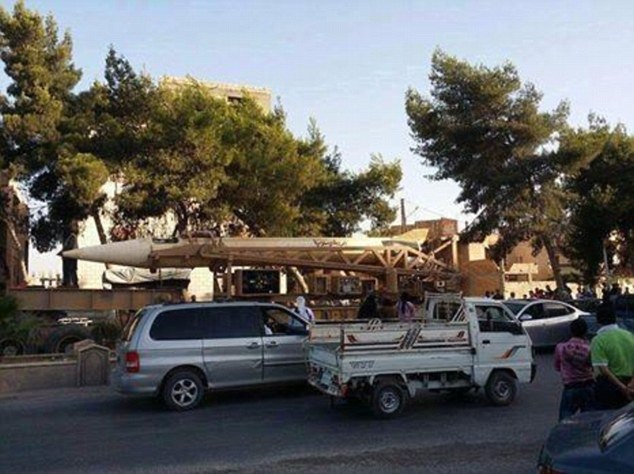 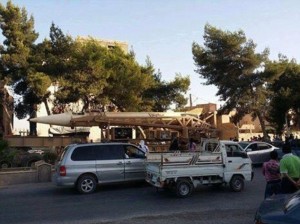 After proclaiming the territory under its control as a “Muslim caliphate,” the Islamic State of Iraq and Syria (ISIS) has shared pictures on social media parading long-distance balletic Scud missile in the streets of its proclaimed capital Raqqa, Syria. Abu Bakr al-Baghdadi is regarded as the caliph and has made calls for “judges and those who have military and managerial and service skills, and doctors and engineers in all fields” to join the caliphate which marks the beginning of a new era. The caliphate is located in the territories of Syria and Iraq could pose a threat to regional security.
Calpih Abu Bakr al-Baghdadi and his fighters are in possession of a scud missile raising questions about the types of arms in their armories.  ISIS was a branch of the global terrorist network, Al Qaeda, but the latter disowned it. As an independent body, it still however shares some of Al-Qaeda’s methods and principles.
In an audio message to rally more fighters, caliph al-Baghdadi urged Muslims to join them and “terrify the enemies of Allah and seek death in the places where you expect to find it.” He told them to “listen, realize and stand to free themselves from the shackles of weakness and in the face of tyranny.” He referred to the caliphate as a “house of Islam” to which migration is “a duty” to those who can do it.
It is still unclear if ISIS has more missiles or if they are functional. Nevertheless, al-Baghdadi has issued a global warning that “whosoever [in the world] was heedless must now be alert” that “we are living today in a new era” that will help them to “hear and understand the meaning of terrorism.”