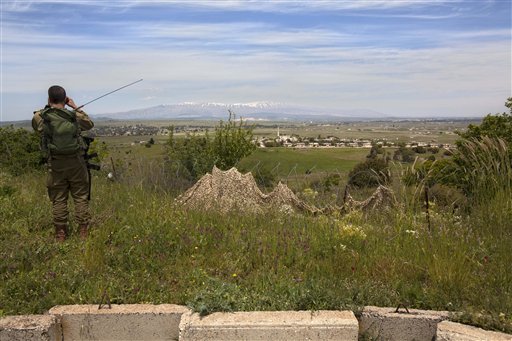 Israel has bombed several targets in Syria after a cross-border attack on its side of the Golan Heights left one person dead. It is the first of its kind since the war started. Israeli warplanes reacted to the killing by targeting Syrian military structures and direct hits are reported to have been confirmed. Damascus has not yet reacted to the bombings. Israel has avoided taking sides in the ongoing Syrian war.
The Israeli-Syrian front along the Golan Heights has been relatively calm before the incident. The person who was killed was a teenager of Arab origin who was accompanying his father to work. Two other people were injured in the attack. They were in an Israeli vehicle that was delivering water to the Israeli military when it was attacked. Prime Minster Netanyahu has presented his condolences to the family
Neither the Syrian government nor the different rebel groups in the region have claimed responsibility. Since the Syrian war begun, pro-government forces have been battling with the rebels to administer as much territory as possible.
Lt. Col. Peter Lerner, a military spokesman of the Israeli army described the attack as an “unprovoked act of aggression against Israel” that can be registered under the “direct continuation to recent attacks that occurred in the area.” Israel has not waited to know who carried out the attack as it launched attacks on nine Syrian military targets near the Golan Heights with “direct hits” confirmed and amongst which were a regional military command center and unspecified “launching positions.”
Israel has been closely following the Syrian war but will not like to be dragged into it. However, the abduction of three teenagers in the West bank has increased pressure on the government to strengthen security around troubled areas.