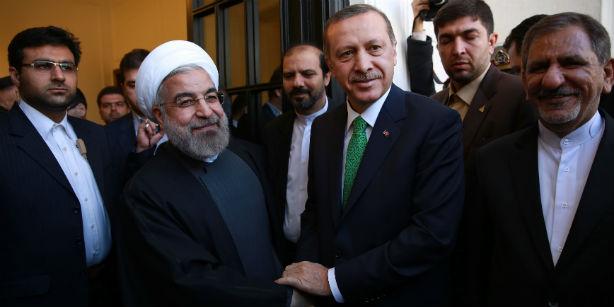 Despite their diverging interests in the Middle East, Iran and Turkey do find a common ground on which they can act to honor their mutual interest. President Rouhani accompanied by a high powered delegation, amongst which are also businessmen, is on a visit to Turkey.  Turkey and Iran have different political views and their bilateral relations are tense. President Abdullah Gul welcomed his Iranian counterpart on his arrival.
The instability and insecurity challenges that some countries are facing coupled with the rising extremism fuelled by the arrival of foreign fighters have forced the two countries to review their policies.
President Rouhani said they are “determined to fight against extremism and terrorism” as “the two important countries in the region.” He stressed that the “important” thing to do is to “stop the bloodshed and conflict in Syria, remove terrorists coming from various countries and to let the people of Syria decide on its future.”
Iran doesn’t share the same views with Turkey with regards to Syria but that didn’t stop them from concluding 10 bilateral deals signed in several sectors including finance, tourism, culture and communications. The two countries want to double their trade to $30 billion by 2015.
Prime Minister Recep Tayyip Erdogan acknowledged that they have “made progress” in their relations with Iran since the election of Rouhani as President. However, Turkey continues to support anti-Assad groups and said that the recently concluded Syrian presideintial election is “null and void” and can’t be taken into consideration. His foreign Minister said the election represents “a clear contradiction to the Geneva declaration seeking a political solution.”
Iran fully supports the elections while Rouhani hopes that his visit “will undoubtedly be a turning point in the two countries’ relationship.”