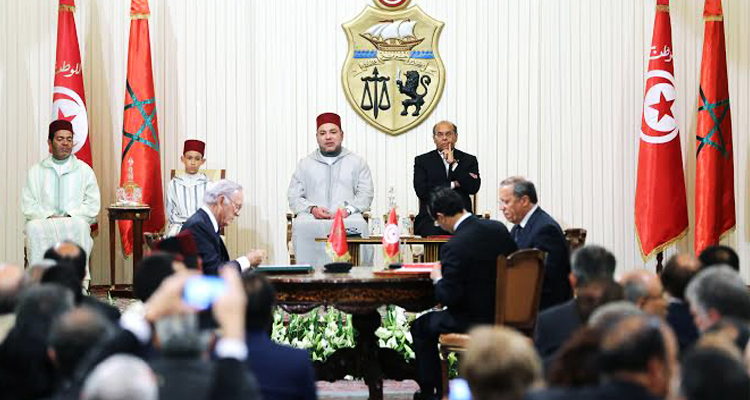 Morocco and Tunisia have renewed their commitment to the Arab Maghreb Union and their shared determination to consolidate the Union that they both deem a strategic choice.
This came in the joint communiqué released on Sunday at the end of the three day official visit Morocco’s King Mohammed VI paid to Tunisia at the invitation of President Mohamed Moncef Marzouki.
The two heads of state who discussed at their meetings several bilateral issues as well as regional and international issues of common concern voiced resolve to endeavor with the other Maghreb countries to hold the long protracted Maghreb summit in Tunisia before the end of the current year, as decided by the 32nd session of the foreign ministers’ council convened in Rabat on May 9.
The Arab Maghreb Union (UMA) was set up in 1989 as a regional organization meant to boost trade and upgrade political ties between Algeria, Libya, Mauritania, Morocco and Tunisia, but has ever since been characterized by lethargy and inaction. The agreements signed in the frame of the Union have mostly remained a dead letter and the Maghreb heads of state have not convened in what is supposed to be a yearly summit since 1994, because of inter-Maghreban disputes and rivalry, especially between Morocco and Algeria which are at odds over the Western Sahara issue.
Out of their concern to give a new momentum to UMA and consequently to Maghreban integration, the Moroccan and Tunisian heads of State emphasized the need to prepare the upcoming summit properly and to amend the Union statutes to make of it a strong regional grouping in its Mediterranean, Arab African and International environment.
The two Heads of State likewise stressed the importance they attach to strengthening the bonds of brotherhood and solidarity between Maghreb countries and to preserving inter-Maghreban coordination and dialogue in a bid to overcome all the obstacles hampering the UMA functioning.
In an address he delivered on Saturday before the Tunisian National Constituent Assembly, King Mohammed VI deplored the obstruction of the Maghreb Union’s evolution and pleaded for the advent of a new Maghreb order and for the construction of a large, strong Maghreb, pointing out that “the Maghreb Union is no longer a mere option or a political luxury; it has become a pressing popular demand and an inevitable strategic goal in the region.”
The joint communiqué stated further that King Mohammed VI and President Marzouki, being both aware of the security challenges facing Maghreb countries and their African neighbors, especially in the Sahel-Sahara region,
because of the increasing threats of terrorism, trans-border crime and illegal immigration, called for more cooperation, coordination and exchange of information at the bilateral, Maghreban and regional levels, to contain the activities of terrorist groups and organized crime networks. The two heads of State also stressed the need to contribute to promoting the region’s sustainable development to ensure security and stability.
The two rulers on the other hand agreed that the shortest way to give a new momentum to UMA goes through the strengthening of bilateral relations.
In this vein, they voiced determination to reinforce, enrich and diversify their bilateral cooperation and to promote sound and exemplary bilateral ties as this constitutes a major pre-requisite for the Maghreban integration process as a whole.
To give evidence that this determination is not a void word, Morocco and Tunisia signed a package of 23 agreements during the king’s visit. The agreements, involving the private sector represented by the General Confederation of Moroccan Businesses (CGEM) and the Tunisian Union of Industry, Trade and Handicrafts (UTICA), were described by Moroccan and Tunisian officials as strategically important. They cover economic, financial, banking, social and security fields and open broad prospects for the integration of the Maghreb.