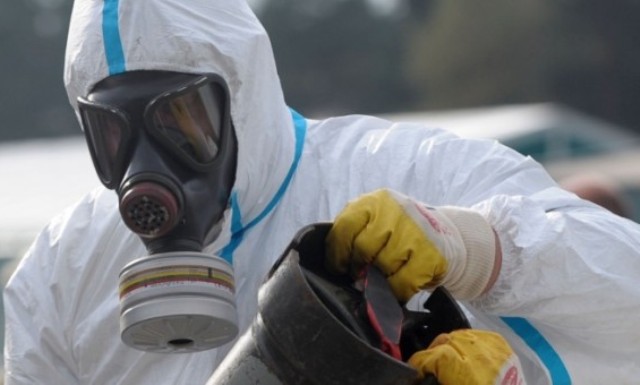 The operation to destroy Syria’s chemical weapons will go beyond the June 30 deadline, UN Secretary General Ban ki-moon has announced. The delay is due to the difficulty of safely transporting the remaining 7,2% of the stock left in the country. The Damascus government has signaled that it has “serious concerns about the safety and security” of transporting the stockpile and doesn’t have total control over the stockpile.
Syria’s chemical stockpile came to the attention of the world when a chemical attack in august killed hundreds of people in a town near Damascus. Both the government and the rebels deny responsibility.
Secretary General Ban didn’t mention how long the elimination of the chemical weapons will take but insisted that taking them out of Syria should be done “as quickly as possible.” Some of the chemicals are being destroyed in Syria but the most dangerous ones are loaded on cargo ships at the port of Latakia.
Ahmet Uzumcu, who heads the Organization for the Prohibition of Chemical Weapons, says the chemicals, including raw materials for making the deadly nerve agent sarin have been packaged and are ready to be taken to the port. The most toxic chemicals will be transferred to an American ship, MV Cape Ray, which is equipped with two machines that will render them inert.
Plans are also underway to destroy 12 chemical production facilities.
Meanwhile, government forces and the rebels continue to battle it out for supremacy forcing the civilians to look for safer places. The upcoming presidential elections of which President Assad is a candidate has been seen as a decision against the Geneva conferences held between concerned parties. The absence of a unified front has also weakened the opposition during negotiations.