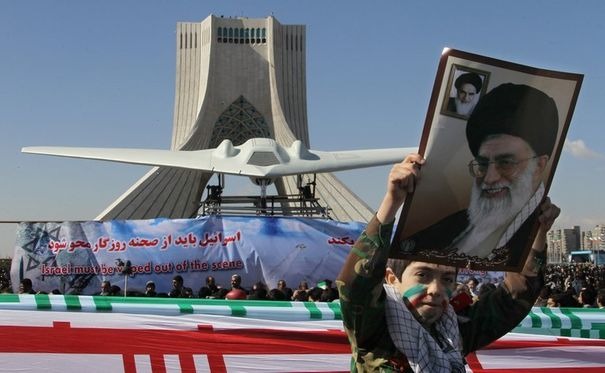 Iran has announced that it has copied the US drone that it brought down over its territory and test flight will soon be held. The drone known as US RQ-170 Sentinel was brought down in an electrical warfare while the US claims that that drone had technical problems.
Almost 3years after the incident, Iranian television reports have claimed that local engineers have “succeeded in breaking the drone’s secrets and copying them” for a Made in Iran replica of the drone. Iran has been working to develop a drone program and had been able to make some advances. Some of its unmanned aircraft that it has made have a range of hundreds of miles and are armed with missiles.
The US RQ-170 Sentinel was used by the US for reconnaissance.  When Joe Lieberman was the chairman of the Senate homeland security committee, he said that the drone was “a very sophisticated piece of machinery” that had served American interest and had helped to view parts of Iran where there are suspicions of nuclear weapon production but can’t be accessed the nuclear watchdogs.
Washington has asked Tehran to return the drone but the request fell on deaf ears. Iran’s Supreme Leader, Ayatollah Ali Khamenei’s, acknowledged the importance of the drone for reconnaissance missions and welcomed the Iranian breakthrough of creating its replica. Iranian television images showed two nearly identical aircraft.
If Iran is able to produce a reliable replica of the drone, it will show that it has made major advances in technology because the US military officials were claiming that Iran does not have the technology to decipher the drone’s secrets.
Iran and the US have tense diplomatic relations due to their different political views and foreign policies.