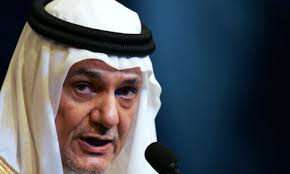 Gulf States are still wary of the threats that the Iranian nuclear program poses to the region. Prince Turki al-Faisal, a senior member of the ruling family in Saudi Arabia who once also served as an intelligence chief, warned the Gulf countries to be ready for all scenarios concerning the Iranian nuclear talks with the five permanent Security Council members and Germany. Iran has always maintained that its program is for peaceful purposes.
During a security conference in Manama, Bahrain, Prince Turki stressed that “we do not hold any hostility to Iran and do not wish any harm to it or to its people” whom he considers as their “Muslim neighbors.” However, he stated that if the Gulf countries want to assure their “regional security,” they should collaborate militarily and also invest in nuclear know-how. He believes that’s how a military balance could be acquired with a nuclear Iran.
The U.S, France, Germany, Britain, China and Russia have agreed a July 20 deadline with Iran to clinch a long-term deal that would allow a gradual lifting of all nuclear-related sanctions imposed on Iran over its atomic program. The prince counseled Gulf countries not to consider the words from Tehran as he cited the “lack of trust in the Iranian leadership,…double talk and the duality of its policies.”
The diplomatic tussle between some countries of the Gulf Cooperation Council also caught the attention of the Prince. Saudi Arabia, United Arab Emirates and Bahrain have recalled their ambassadors from Qatar because of allegations that the latter has been interfering in their internal affairs. He highlighted that “the most dangerous thing that is facing our countries today is this new rift in our relations” which could be exploited by the enemy to its advantage.