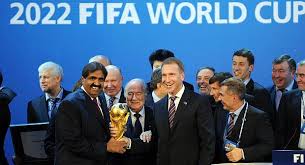 Reports from Bloomberg have stated that Qatar has revised its plans for the FIFA World Cup that it will be hosting. The number of stadiums to be build has been reduced by from 12 to 8 without publicly giving reasons behind the decision. When Qatar was bidding to host the World Cup, it planned to build 12 stadiums, including nine new playing fields and three refurbishments. Preparations for the World Cup to be staged in the Middle East for the first time have been surrounded with controversies.
Qatar’s plans to host the event included a massive investment and construction plan which required billions of dollars. According to the ministry of business and trade, they have estimated to spend more than $200bn on new infrastructure, including $34bn on a rail and metro system, $7bn on a port and $17bn on an airport. The stadiums will cost $4bn.
Bloomberg reported that Qatar was forced to revise its plans due to rising costs and delays it has been facing since it started its preparations for the global event. John Sfakianakis, chief investment strategist at investment company MASIC in Riyadh, stated that “it does always make good sense to do necessary cost-cutting and reviews of capex for such huge projects that are front loaded.” He added that Qatar’s decision was made after “an assessment of the real needs on the ground.”
Last April, Bank of America Merrill Lynch said in a note to investors that Qatar was negotiating with FIFA, football’s world governing body, to reduce the number of stadia it builds for the prestigious event.
Qatar News Agency did report that 2014-2015 budget surplus reduced by 1,4% compared to the previous year as spending on key projects increased by 17%.