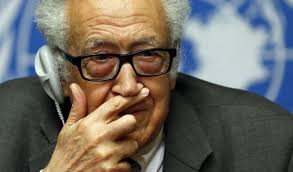 Efforts to end the Syrian crisis could drastically head for a failure if Damascus holds presidential elections before the end of the year. Mediator Brahimi is convinced that it will lead to more chaos because “all the opposition” will turn away from the negotiating table. Government officials said it is a part of their sovereign duty. An official announcement is yet to be made but preparations are undergoing.
Assad is expected to seek for a third term and could probably win the elections which will keep him in power till 2021. Negotiations between the government and the opposition in Geneva have not been fruitful as both parties disagree on ways to end the 3year old war.
The President of the UN Security Council for March, Ambassador Sylvie Lucas of Luxembourg, said mediator Brahimi thinks that holding elections will be “incompatible with the Geneva process.” According to Brahimi, he is unaware of an “official declaration yet in Damascus” but preparations on the ground do “indicate that there is an election.” He warned that the government could be isolated if it goes ahead with plans because “the opposition, all the oppositions, will probably not be interested in talking to the government.”
Damascus has not reacted to the reports but its Ambassador at the U.N Bashar Ja’afari said holding elections were a “sovereign domestic matter” without denying nor confirming whether Syria was gearing for presidential elections. He urged delegates to dwell on “combating terrorism” when they meet in Geneva.
Brahimi is doubtful whether a third round of talks will be held. He has threatened to resign several times. He laments on the gains made by the diplomatic approach and the way “the country continues to be systematically destroyed,” a senior Western diplomat stated.