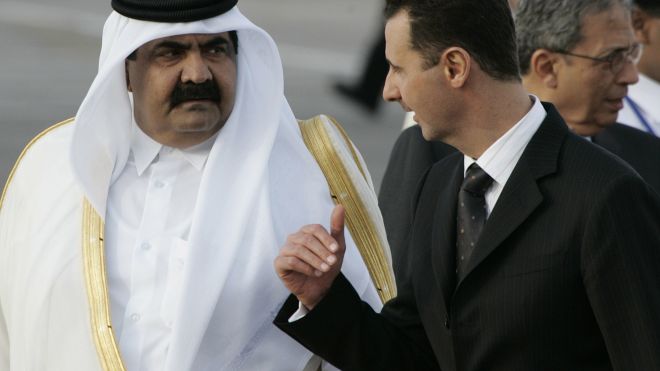 The faction of the rebel Syrian coalition which broke away from the group has announced that it wants to come back as part of its efforts to reactivate its political activity. The faction comprises of a 40-member bloc coalition which pulled away from the 120-member coalition before the beginning of the year. Its will to return is considered by analysts to be part of the diplomatic tussle in the Gulf especially between Qatar and Saudi Arabia.
Elections for the new leader of the Syrian coalition are scheduled for July. Current leader, Jarba, is backed by Riyadh. The coalition group that is making a U-turn on its decision is pro-Qatar. Many believe that it wants to present a candidate to vie for the post. However, the group’s released statement stated that they “decided to resume our political activity in the coalition as a single bloc” in order to end the “perilous changes the Syrian revolt is undergoing.”
Infighting within the opposition coalition has undermined rebel efforts to take on forces loyal to Syrian President Bashar al-Assad, and has also played into the hands of rival, more hardline Islamist outfits which include foreign militants. Henceforth, the diplomatic crisis between their major supporters, Saudi Arabia and Qatar, could further increase their differences. The government in Damascus and its pro military forces have been able to push the rebels on their back heels since the beginning of the year.
Diplomatic efforts to end the end in Syria have been less fruitful and the opposition leader wants a more aggressive approach to end the war. Jarba told the Arab League that “there is no longer space for diplomatic language or political solutions” because the Assad government “do not understand anything but force” and “only force will deter them.”