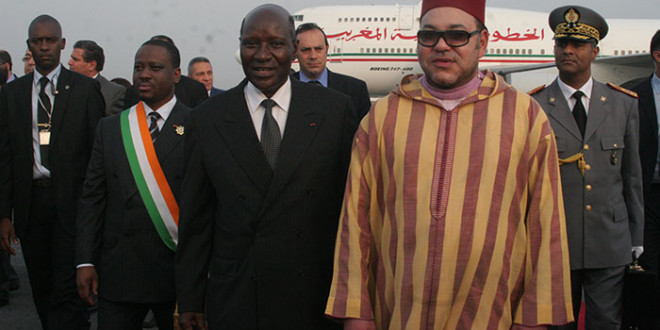 King Mohammed VI of Morocco who is currently on a visit to Cote d’Ivoire pleaded for strengthening south-south cooperation and pointed out that if cooperation was in the past based on trust and on historical ties, today, it increasingly hinges on efficiency, performance and credibility.
“Considering the profound changes sweeping over the world, the mechanisms and scope of diplomacy – even its status in international relations – are expected to adapt to new realities. In the past, diplomacy served to consolidate political ties. Today, it is the economic dimension which predominates. It is a crucial component of diplomatic relations,” underlined the Moroccan ruler during the Ivorian- Moroccan Economic Forum held Monday and Tuesday in Abidjan, in the presence of scores of economic operators and businessmen from the two countries.
The king who insisted that South-South cooperation should be at the heart of inter-African economic partnerships and that the continent’s wealth should benefit African peoples in the first place, nonetheless urged the continent, part of its commitment to openness, to continue to develop fruitful relations with the countries with which it has the deepest historical ties as well as the greatest affinity.
The king also underscored the key role of the private sector, thanks to its creativity and dynamism, in promoting a sustainable development in Africa, mainly in specific promising areas such as agriculture, industry, science and technology, and infrastructure development.
Stressing the need to mobilize resources, to boost private enterprise, and to improve the public sector efficiency, he said leveraging South-South public-private partnerships and the transfer of technology are key elements in this respect.
“Better governance, progress based on the rule of law, and the peaceful settlement of conflicts must constitute shared priorities,” he said deeming the development of the banking sector, the urbanization of the population and African workers’ increasing productivity open new prospects for the achievement of prosperity for future generations.
The King, who underlined the importance of all projects, big or small, when they are meant to improve the daily lives of citizens, transformed his words into concrete action by launching a low-cost housing project to be carried out by Moroccan construction companies.
Besides this 8,000 lodging unit project, Moroccan leading groups like Addoha and Alliances are involved in another huge housing project providing for the construction of 16,000 units for an investment of over €300 million.
The king was also due to launch a fishing village in Côte d’Ivoire, deeming that such projects contribute to job creation and to the expansion of small and medium-sized businesses and industries, which are the continent’s real engine of growth and the main job provider for its young people.
As he stated in his speech before the Forum, Moroccan-Ivorian
strong political relations are underpinned by a dynamic economic partnership where Moroccan private companies play a key role.
The closing session of the Forum was thus marked by the signing of 26 partnership agreements by Moroccan and Ivorian officials and private sector leaders.  The agreements cover a broad range of sectors, including investment, agriculture and fisheries, industrial cooperation and trade, banking, mining, pharmaceutical industry, and education among others.
The king’s visit to Côte d’Ivoire, the second in a year, is part of his new diplomatic shuttle in the region that led him last week to Mali. After Abidjan, he will visit Guinea and Gabon.