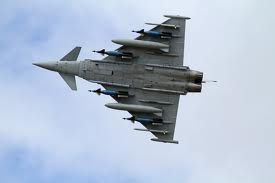 A price has finally been agreed between the Saudi government and British defense contractor BAE Systems over the Eurofighter Typhoon jet deal. Known as the Salam deal, the original contract underwent renegotiations after Saudi requested more advanced weaponry and equipment for the Typhoon fleet. Developments have been watched closely by countries in the region especially by Bahrain, Qatar and Malaysia.
According to BAE, the terms were broadly consistent with guidance the company gave in October for 2013 earnings, when it warned that failure to complete the deal could hit full-year profit by 6-7% per share.
The final agreement between the two parties was delayed by Saudi Arabia’s request to have more advanced weaponry attached to the fighter jets prior to the conclusion of the deal in 2007 for the supply of 72 Eurofighters for $7,4 billion. Negotiations have been dragging on for years although supplies of the Eurofighter were never halted thereby raising concerns over rising amounts of cash being committed without profits.
The Chief Executive of the British company, Ian King, pointed out that the agreement as “an equitable outcome for all parties,” especially with a country that he describes as a “much valued customer.” Struggling to keep up amid shrinking defense budgets in the United States and Europe, Saudi Arabia has become greatly important to BAE.
Money from the contract expected to be forthcoming in the first-half of this year, will give the company “more flexibility for cash deployment moving forward” according to RBC Capital Markets analyst Robert Stallard. It will also permit the kingdom to move on to other agreements such as a deal for a second batch of Eurofighters.
BAE suffered a major setback in December when the United Arab Emirates pulled out from talks over a potential $9.8 billion deal.