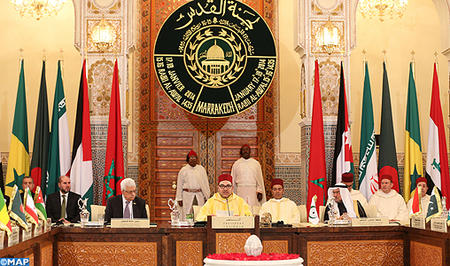 Palestinian President Mahmoud Abbas has warned against the unprecedented serious threats endangering Al Quds (Jerusalem) and Al Aqsa Mosque pointing out that Israel is speeding up its plans to judaize the city, obliterate its cultural landmarks and alter its religious and demographic structure.
In an address he made Friday during the 20th session of the Al Quds Committee, held in Marrakesh under the chairmanship of Mohammed VI, King of Morocco and Chairman of the Committee, President Abbas said Jerusalem and Al Aqsa Mosque have never been as seriously threatened as they are today.
“The occupier is carrying on its plot to achieve its ultimate goal, namely the Judaization of Al -Quds through the alteration of the character and structure of the city, the establishment of a different landscape that suits the occupying force’s mythical illusions and insolence, and the implementation of an ethnic cleansing plan targeting the Palestinians in order to make of them a minority in their own city, with a resident’s status,” said the Palestinian President.
Meanwhile, he added, Israel seeks to expand the Jewish presence through more settlements and plots to impoverish the holy city through the destruction of its infrastructure and economic resources.
The Israeli settlement policy in the occupied Palestinian territories, including Jerusalem, is repeatedly denounced by the international community as being illegal under international law and as an obstacle threatening the peace process and the two-State solution.
Part of the efforts required to counter the Israeli plots, the Palestinian leader called on Arab and Islamic states to make of Jerusalem the cornerstone and foundation of their political and economic relations with the rest of the world.
He also stressed the need to upgrade the city’s infrastructure, to support educational, social and cultural institutions as well as health facilities, to revive economic sectors and to back thus the steadfastness of the city’s inhabitants.
In his opening speech, King Mohammed VI also underlined the necessity to come up with innovative measures to confront the aggressive policies endured by the steadfast Palestinian people, as well as the settlement policies and the violations perpetrated against Al-Quds and the Al-Aqsa Mosque.
“We cannot defend the holy city against Judaization schemes nor support its steadfast inhabitants through empty slogans or the exploitation of this lofty cause for pointless outbidding purposes,” the king said, calling for practical, well-thought-out proposals and realistic initiatives, with precise implementation means and funding mechanisms.
As regards the preservation of the cultural and religious heritage of Al Quds, the king recalled that the Jerusalem committee’s financial agency, Bayt Mal Al Quds, set up in 1998, is making every effort to ensure the conservation of the holy Al Aqsa Mosque and the other sacred sites and cultural landmarks and endeavors to oppose the closure of essential Palestinian institutions and the confiscation of Palestinian land and property in the occupied city.
The King announced in this respect that the agency has developed a five-year plan for the 2014-2018 period providing for the implementation of several projects within specific timeframes.
About the ongoing peace negotiations, President Abbas reiterated the Palestinian Authority’s commitment to national constant principles and rejection of any attempt to use these negotiations as a cover for the expansion of Israeli settlements in the occupied Palestinian territories.
He also renewed rejection of any presence of the Israeli army in the Palestinian territories, insisting that no peace is possible without stability and that no accord is possible without the recognition of occupied Eastern Jerusalem as the capital of the State of Palestine.
The foreign ministers of the Jerusalem committee member states and representatives of the United Nations, the European Union, the Vatican and the Arab League took part in the meeting.