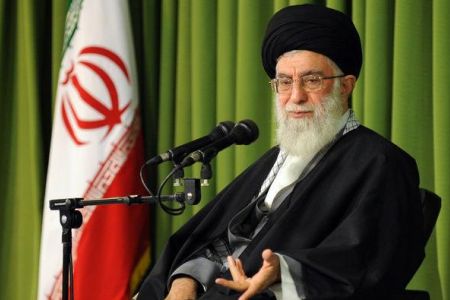 Few hours before the expected meeting of Iran’s deputy foreign minister Abbas Araqchi and EU’s deputy foreign policy chief Helga Schmid in Geneva, Ayatollah Ali Khamenei has made statements considered to raise the tension of the meeting. Khamenei is Iran’s Supreme Leader. He claimed that the US has affirmed itself as an enemy to Tehran, Islam and Muslims at large. Araqchi is expected to meet with Wendy Sherman, the US State Department’s Undersecretary of State for Political Affairs and US envoy to the controversial nuclear program negotiations.
Iran and the permanent members of United Nations Security Council together with Germany have been negotiating how to deter Iran from developing nuclear weapons. Tehran maintains that its program is for peaceful purposes. Ayatollah Khamenei claimed that “the nuclear talks showed the enmity of America against Iran, Iranians, Islam and Muslims”. He said that Iran “had announced previously that on certain issues, if we feel it is expedient, we would negotiate with [the United States] to deter its evil”. United States and Iran have been very vocal about the nuclear program.
The negotiairs were able to agree on a temporal deal in November but fresh sanctions from the US were seen as a setback to the achievements. Ayatollah said pressure is not the way to convince Iran about its nuclear program. He stated that “our enemies do not know the great Iranian nation. They think that their imposed sanctions forced Iran to enter negotiations. [They are] wrong”.
The latest sanctions were reported to be provoked by the Iran’s development of new, more advanced centrifuges used to enrich uranium despite agrreing to halt some aspects of its program for 6 months.
President Rouhani has made it a point of duty to remove sanctions during his campaign.