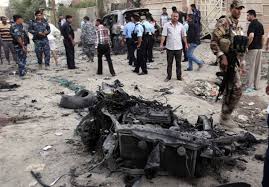 Tensions in Anbar have escalated leading to government airstrike in the area. The Iraqi government is often accused of being anti-Sunnite because Prime Minister Maliki is a Shia. Tensions began to escalate at the beginning of the week when 10people died during government forces breakdown on a Sunni anti-government protest and their protest camp in Ramadi, a town in Anbar, before arresting a Sunni MP.
These actions have led to extremist Sunnis taking up arms against the government. Most of them are believed to be members of the al-Qaeda linked Islamic State of Iraq and the Levant (ISIL). Clashes have taken place in the towns of Fallujah and Ramadi and the extremist are claiming to be victorious. They have posted videos of burning government vehicles, checkpoints manned by them and issuing challenges to Prime Minister Maliki.
A senior police officer in the province of Anbar where the two towns are located confirmed that 10 police stations have fallen to the extremists. An official at the Interior Ministry also admitted that ISIL is controlling large parts of Fallujah and Ramadi. “Half of Fallujah is in the hands of ISIL group, and the other half is in the control of armed tribesmen,” the official said.
Some of the Sunni tribesmen joined the fight because they claim that they are politically marginalized; allegations that the prime minister denies.
To regain control of the two towns, the Defense Ministry has announced that it has already carried out airstrikes in the area. The weapons and materials of the ISIL are being targeted to weaken their stance.
Attacks have also taken place in other parts of the country. There are reports that the Shias are also regrouping to begin reprisals.