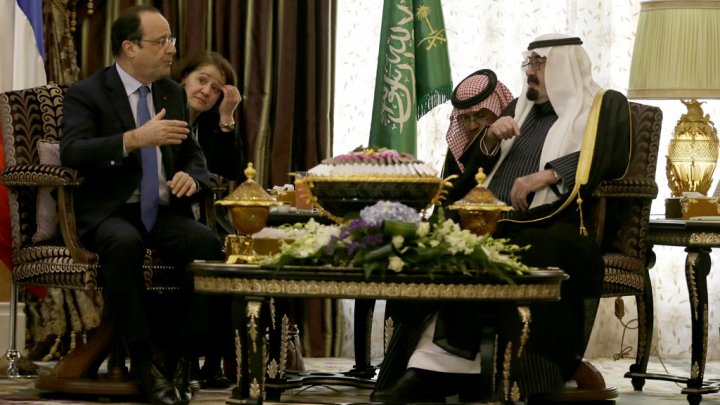 François Hollande’s two day visit to Saudi Arabia has come to an end. The French president was accompanied by a delegation of four ministers and 30 businessmen. During his visit, he held talks with King Abdullah with whom he discussed topics of common interest and also issues surrounding the Middle East.
Trade was high on the agenda and President Hollande told Saudis that “we can provide you what you want” as he presented France’s capabilities in the energy, transport and food sectors. Saudi is been faced with ever rising energy demands.The strengthening of ties between the two countries is also seen as a move by Riyadh to sway away from its old ally, the US.
Washington’s easing stance against Assad and Tehran didn’t please Saudi authorities. A member of the French president’s entourage said King Abdullah hailed the “convergence” of positions he shares with the president in the Middle East, at global level and views towards Arabs.
Saudi Arabia wants Assad to be removed from power. It has been very supportive of the rebels in Syria. President Hollande alleged that the Assad is implementing a plan to make the Geneva II conference a failure by forming an alliance with radical militants in order to not reach a solution. According to the delegate, the king “expressed his concern, even anxiety, about regional crises — Iran, Syria, Lebanon and Egypt — and praised France’s courageous position on these key dossiers”.
President Hollande hopes that the two governments will continue cooperatingand collaborating. He described this year as a year of “big successes” for French companies in Saudi and hopes that 2014 will be more prosperous. Trade between the two countries is around €8 billion but is considered unsatisfactory by Hollande.