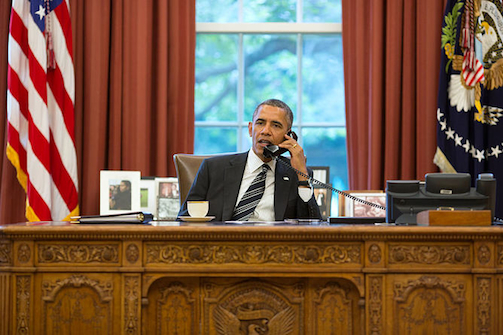 In a bid to calm down the United States’ Gulf allies, infuriated by Washington’s recent rapprochement with Iran and its new diplomatic approach towards the Iranian nuclear program, President Barack Obama has okayed the supply of weapons and defense services to the Gulf Cooperation Council member countries.
“The furnishing of defense articles and defense services to the Gulf Cooperation Council will strengthen the security of the United States and promote world peace,” said President Obama in a memorandum he addressed last week to the Secretary of State John Kerry.
The oil-rich six Gulf monarchies (Bahrain, Kuwait, Qatar, Oman, Saudi Arabia, and the UAE) which are still fearing the threat of their Iranian neighbor will surely feel appeased after receiving the U.S.-made military equipment that will strengthen their missile defense capabilities, maritime security as well as their means of anti-terrorism struggle.
According to the spokeswoman for the national Security Council (NSC) Bernadette Meehan, President Obama’s decision reserves to the GCC members the same treatment granted to NATO, the UN or the African Union, with regard to the supply of U.S.-made weapons.
The decision “reflects our strong commitment to the GCC and our resolve to work with our Gulf partners to promote stability and security in the region in the long run,” said the spokeswoman.
The Gulf monarchies which set up a common military force, “the Peninsula Shield Forces” few years ago have recently announced the formation of a unified military command that will act as a coordinating structure between all existing sub-commands of air, land, and marine forces. The move is seen as a preparation to face up any contingency danger, particularly on the part of Iran.
The Sunni dynasties ruling the GCC members are actually worried by Shiite Iran and its nuclear program despite the deployment on their soil of a 35,000 strong US military contingent in the frame of defense and military cooperation agreements concluded between each of the GCC member countries and the United States in the morrow of the first Gulf war (1991).
Since the signing last November of the deal providing for a six-month freeze on Iran’s nuclear program, Washington has been trying to reassure its nervous allies, including the GCC and Israel, affirming that the agreement will not alter U.S. presence or determination in the region nor will it lead the U.S. to adjust its forces or its military planning in the area.