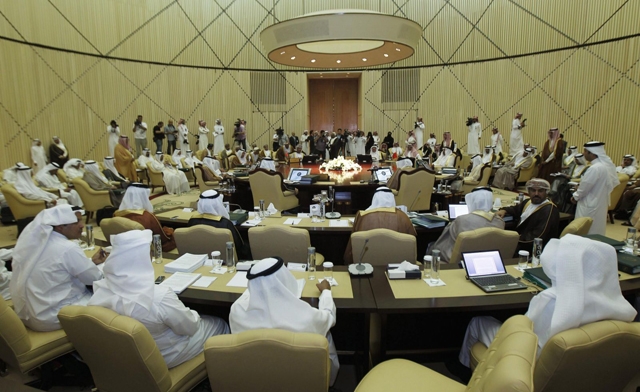 The Gulf Cooperation Council member countries, which have been dreading Iran and its nuclear program as a potential threat to their security and to the security of the entire Middle East region for years, have “welcomed the new stand of the Iranian leadership towards the GCC states.”
In a communiqué issued on Wednesday at the conclusion of their 34th summit held in Kuwait, the GCC leaders “welcomed the new stand of the Iranian leadership towards the GCC states” and expressed hope that “such tendencies would be followed by tangible steps to reflect positively on peace, security and stability in the region.”
The GCC also welcomed the preliminary agreement signed by the “P5 +1” countries with Iran in Geneva in November, deeming it “an initial step toward a comprehensive and lasting agreement on Iran’s nuclear program that would end international and regional concern” about this program.
The communiqué stressed the importance of closer cooperation between the GCC countries and Iran “on the basis of good neighbourliness and non-interference in internal affairs and respect for the sovereignty of countries in the region, as well as the necessity “to refrain from threat or use of force.”
The GCC has repeatedly accused Shiite-led Iran of intervening in their internal affairs and in violating their air space and territorial waters.
Iranian President Hassan Rouhani has repeatedly expressed his administration’s resolve to promote Tehran’s interaction with the international community; particularly Iran’s neighboring states, based on mutual respect.
Despite the seemingly appeasing tone of both sides, the GCC announced the formation of a unified military command that will act as a coordinating structure between all existing sub-commands.
The new six-member structure that will not replace the “Peninsula Shield Forces” will coordinate air, land, and marine forces under one umbrella.
The GCC Summit also decided to establish the Gulf Academy for Strategic and Security Studies.
The idea to unify the GCC military command, to face up any contingency danger, particularly on the part of Iran, was floated by Saudi Arabia in 2006 but was not materialized.
The United States’ recent rapprochement with Iran and the US new diplomatic approach towards the Iranian nuclear program might have speeded up the GCC’s decision to set up the unified military command. The Gulf States are primarily concerned that Washington’s opening up to Teheran might result in a nuclear deal that would, as explained in a recent paper by “the National Interest”, a US think tank, “threaten their security and sanction the emergence of Iran as a power broker and policeman of the region.”
Washington’s relations with its traditional allies in the Gulf have lately been strained because of its rapprochement with Iran and also because of disagreement about the Obama Administration’s response to the crises in the Middle East, especially in Egypt where the sacking of Elected President Mohamed Morsi by the military was staunchly backed by the Gulf States.
In the communiqué issued at the conclusion of their 34th summit, the GCC leaders renewed “support for the Egyptian people and their choices of democracy” and pledged “to support the Egyptian economy so that Egypt can regain its leading role on the Arab and regional levels.”
Last week, US Secretary of Defense Chuck Hagel who was attending the Manama Dialogue security conference has apparently cleared out the GCC members’ fears when he affirmed that the agreement on Iran’s nuclear program will not alter U.S. presence or determination in the region.
The Defense Department will not adjust its forces in the region or its military planning as a result of the interim agreement with Iran, the secretary said, according to the Pentagone website.