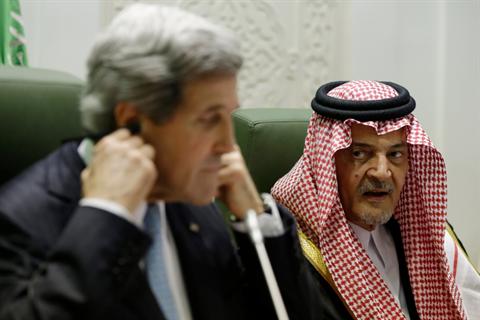 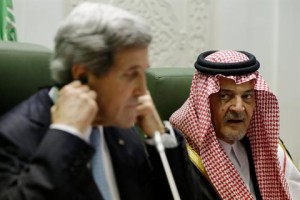 Secretary of State John Kerry has made a stop in Riyadh to meet the King after Saudi Arabia’s intelligence chief Prince Bandar bin Sultan told European diplomats that they would be making “a major shift” in their relations with the US. The breakdown in relations started when the kingdom rejected its temporal seat at the UN Security council due to the organization’s “double standards”.
Riyadh wants Assad to leave power and an end to the Iranian nuclear program. Tehran has always been at odds with Saudi and fears that if Assad stays in power, it will reinforce Iran’s influence in the region.
Before leaving Egypt for Saudi to ease the rising tension, Kerry gave assurances to their regional allies. He highlighted that although their “individual tactics” in Syria is different from “some countries”, they “all share the same goal”. He said they all want the “salvation” of Syria and an “opportunity to choose their future.” He underlined that they “will stand with” their allies in the region if they are “attacked from the outside”.
Saudi Arabia is an important diplomatic and trading partner for the US. It want’s Assad to be forced out by military means and didn’t appreciate the US’s decision to suspend a military air strike on Assad’s defense forces. Kerry has stated that “history has demonstrated that democracies are more stable, viable and prosperous than any alternative”.
Frederic Wehrey, senior associate in the Middle East program at the Carnegie Endowment for International Peace wrote that intelligence ties between the two countriesover Iran remains solid. He added that the meeting will be likely be an occasion to “demand greater consultation and communication from the US and a more forceful line on Syria”.