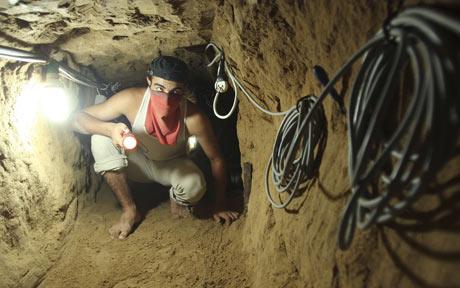 Few weeks after authorizing the passage of building materials into Gaza, Israel has announced that it will be suspending the decision after discovering a Hamas built tunnel on its territory. The tunnel is said to be 1,7kilometers long, approximately 18 metres deep and took almost a month to be built. Prime Minster Netanyahu called it the “Gaza terror tunnel” while Hamas claims that the Israelis are “exaggerating” the finding.
Defense Minister Moshe Yaalon said they decided to halt the transfer of building materials into Gaza because “construction materials were used to dig the tunnel.” He added that the discovery has “prevented attempts” on Israelis. Explosives were found in the tunnel.
The tunnel is 450 meters into Israel. The army stated that “approximately 500 tons of cement and concrete” was used to build the tunnel. It was equipped with lighting and a trolley supposedly for faster transportation. The complaints of unusual noise by Kibbutz residents led to its finding. The tunnel was dug from a house in Absan village near Khan Younis in Gaza to kibbutz and went almost as far as Ein Hashlosha.
Netanyahu hailed the efforts of the army as part of their “aggressive policy against terror” but raised concerns over recent activities after enjoying the “quietest year in over a decade.” Yaalon said it was “further proof” that Hamas “was continuing to prepare itself for confrontation with Israel and terror activities”.
Hamas seems to be unfazed by the discovery. The spokesman for the military wing, al-Qassam Brigades, boasted on twitter that “the minds which manage to dig the tunnel can dig dozens more”.  However, Hamas main spokesman, Sami Abu Zuhri, alleged that Israel wants to “justify the blockade and the continuous aggression on the Gaza Strip.”