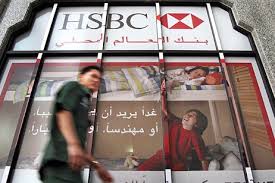 HSBC Holdings, Europe’s biggest bank, is winding up some of its activities in certain countries found in the Middle East and North Africa. The bank is also limiting its activities in certain areas because it wants to boost its profitability. Bahrain, Jordan and Lebanon are among the first countries to be affected.
The bank revealed that it decided to halt its functions in these three countries after a “detailed review” of its business in the region. Its operations will cease in the country during the first week of October. The closure will not be affecting its customers who have invested in its wealth management scheme because they will continue to receive basic services until maturity.
The Chief Executive of HSBC, Stuart Gulliver, wants to restructure the bank globally and give it a new dimension in order to make it more profitable. Since then, 54 businesses have sold by the bank or exited. In Oman, it merged with a local bank.
The bank has assured its employers that there won’t be any job loss because they will be working for other teams of the company. HSBC used to be in 14 different countries in the Middle East and North Africa. The bank has also mentioned that its “global strategy for retail banking and wealth management is to offer and grow the wealth business in markets where we can achieve scale.” HSBC’s wealth management operations fall under its retail and wealth management division. It operates a private banking business separately.
Experts believe that the reason behind the banks decision to focus on certain areas is because competition in the sector has become intense. Almost 30 wealth and private banking firms have been competing to attract customers in the MENA.