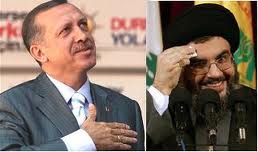 Ankara is not willing to follow the footsteps of the European Union (EU) in naming Hezbollah’s armed wing a terrorist group. The EU considers Turkey as a country “on the road to EU membership” on its website. Diplomatic sources revealed that Turkey abides by the resolutions of the United Nations and not to regional institutions.
Hezbollah has been accused of participating in the Syrian war as an ally to government troops. The group has not denied it but lambasted the EU when it decided to label its “armed wing” a terrorist group. The “political wing” remains recognized.
Deputy Prime Minister Bekir Bozda? said their participation in the Syrian war warrants a change of name from Hezbollah to Hezb al-Shaitan because they have claimed the lives of several innocent citizens. The Lebanese group didn’t respond to the remarks of Bozda?.
According to sources well versed with Turkey’s foreign policy, the authorities uphold resolutions from the UN regarding terrorism. They added that at the domestic level, authorities “condemn the terrorist activities individually;” thereby relegating the blacklisting of Hezbollah’s armed wing to inapplicability because Turkey doesn’t have a list for terrorist groups. Questions on whether Ankara’s stance will affect its accession to EU membership remain unclear.
Mehmet Özcan, the chairman of the Ankara Strategy Institute, stated that there will not be “a legal precedent” even if Turkey follows EU’s footsteps because it will be a complicated task to execute. He added that it will result to further bilateral constraints for Ankara which has halted relations with Damascus and Tehran.
Chairman Özcan believes that the Syrian war has taken a sectarian turn and the labeling of Hezbollah’s armed wing as a terrorist group by Ankara will make the government look like an anti-Shia institution.