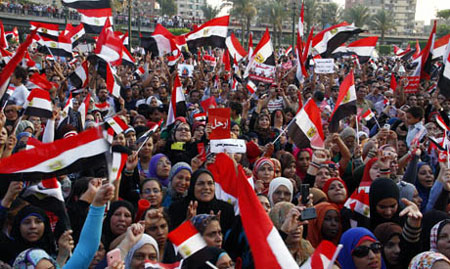 Chaos could be far from being over, after the Tamarod campaign and the 30th June Front, groups behind the major demonstrations which led to ousting of Morsi by the Army, declared that they are uneasy with the roadmap presented by the Army. They have called for the Army’s Constitutional Declaration to be sidelined, and urge for demonstrations on Friday demanding a brand new constitution.
These two groups have supported the Army’s intervention and their call for demonstrations will come as a surprise to many. Demonstrations will be held at the Tahrir Square and at the Ettehadiya Presidential Palace. Hassan Shahin, Tamarod’s spokesperson, criticized the Muslim Brotherhood for sacrificing the lives of the party’s youth for its leaders, despite several messages addressed to them to stay away from the streets. He encouraged security personnel to “firmly deal with them” and “arrest those who are a threat to national security and to the Egyptian state.” Going on further, he urged political parties to unite because the undermining of a new constitution will be beneficiary to Morsi’s party.
The National Association for Change (NAC) reiterated similar calls. Spokesperson Ahmed Taha al-Noqr said the demonstrations will also be an opportunity for the Egyptians to remember their victory over Israel, during the October 1973 war. He clarified that the demonstration is not against the Army, before pointing fingers at International organizations for wanting to divide Egypt and make it a safe haven for terrorist groups. Al-Noqr warned that their revolution will not be hijacked.
Khaled Youssef, a renowned Egyptian movie director, said artists will be present but underlined that the tension between political powers is “a cultural conflict” for them to solve.