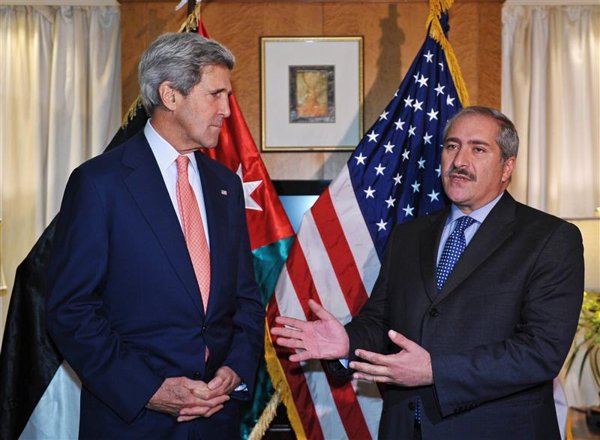 John Kerry has arrived in Amman for another round of talks to solve the Israeli-Palestinian conflict. However, his trip seems to be poorly timed as the European Union decides to hijack funds for Israeli projects, sending mixed feelings to the parties. Secretary of State Kerry will be meeting separately with the Jordanian King, his Foreign Minister and a delegation from the Arab League.
The political crisis in Egypt and the war in Syria are among the important topics to be discussed. Department of State’s spokeswoman, Jen Psaki, said Kerry will be giving “an update on Middle East peace” to king Abdullah II and the Arab League during their meetings.
During his visit, Kerry is due to hold separate meetings with Jordanian leaders, Palestinian president Mahmud Abbas and an Arab League delegation. He won’t be meeting with the Israeli authorities in Jordan.
Palestinian officials remain curious about the “new ideas” Kerry has come with, after his last efforts for talks to resumes were considered encouraging and hopeful. However, they are rejoicing over the EU’s decision to block its funds to all Israeli institutions operating in territories beyond the 1967 borders, which includes the Golan Heights, the West Bank and East Jerusalem. Hanan Ashrawi, a Palestinian activist, called it “the beginning of a new era.”
Criticisms have rained on the EU from Israel. Prime Minister Netanyahu has vowed that they will “not accept any external edicts” regarding their borders because only direct negotiations can resolve it. Deputy foreign minister, Zeev Elkin, said it’s a “very significant and worrying move” which “certainly doesn’t add to the atmosphere of peace talks.”
Spokeswoman Psaki did insist that the return of Kerry to the region shows that there are feelings of “an opportunity to keep making steps forward.”