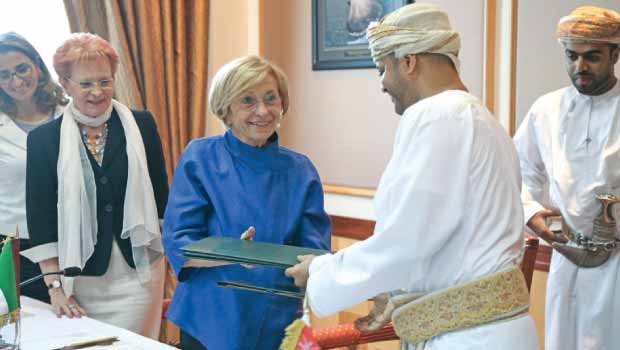 The fourth meeting of the Omani-Italian Joint Committee ended with the signing of two documents, with the ambitions of strengthening their bilateral relations in Muscat, Oman. Both parties urged their business community to take advantage of the cordial relationship to pursue their investment goals.
A joint statement was signed between Sayyid Badr bin Hamad bin Hamoud Al Busaidi, Secretary General of the Ministry of Foreign Affairs, and Emma Bonino, Italian Minister of Foreign Affairs. Secretary General Sayyid said that their relationship has been fruitful for more than 40 years because it is based on “friendship, mutual respect, and joint interests.” One of the solidifying factors of their relations is the cooperation in economic affairs and mutual desire to continue pursuing them.
In the bid to continue cementing and developing it, Oman’s Chamber of Commerce and Industry (OCCI) and the Italian Industries Federation (IIF), inked a Memorandum of Understanding (MoU) between them. Commitments have been made to have regular economic councils and Chamber of Commerce and Industry meetings between the two countries.
Emma Bonino, reiterated that trust plays a major role in their trade relations. She acknowledged that the dynamics behind their relations is their joint interests. Sayyid called on the Italians to take advantage of Oman’s investment opportunities citing that the economy has been on a continuous growth. He also added that Oman still has the potential for further cooperation in various sectors, and the government maintains a strong relation with the private sector in both Oman and Italy.
Both representatives agree that there are still obstacles that affect their bilateral trade and investment exchange.