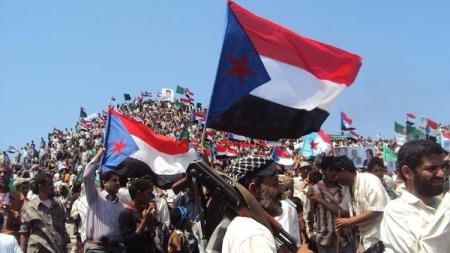 Yemen could be on the verge of a secession after the 19th anniversary of the end of the civil war, which led to the unification of North and South Yemen, turned into a protest in southern Yemen with calls for an end to the “occupation” of the South. A national dialogue between political heads and representatives of the civil society from both regions, and supported by the United Nations was also criticized.
During the protests, the flag of South Yemen and images of Hassan Baoum, head of the Southern Movement’s supreme council, were brandished to show their will of breaking away from the union. Thousands of protesters at the Hadramawt provincial capital of Mukalla shouted “No union and no federation.” The unification of the two Yemens was in 1990 but 4 years later, the South walked away from the union paving way for a brutal civil war won by the North.
Northern troops continue to occupy the south to maintain the union but its presence is seen as an act of occupation and chants of “No to occupation” echoed during the protests. They claim that they continue to be marginalized and discriminated against by the North. Presently, Yemen is in a transitional period after President Ali Abdullah Saleh was forced to leave power. The country is led by President Abdrabuh Mansur Hadi. The national dialogue composed of representatives of political and civil society across the country will draft a new constitution and prepare elections in 2014.
However, organizers of the protests want “negotiations… under Arab or international patronage, to discuss ways of ending the occupation of the south” as they reject national dialogue supported by the UN. The protests have crossed to other towns in the south and offices remained close.