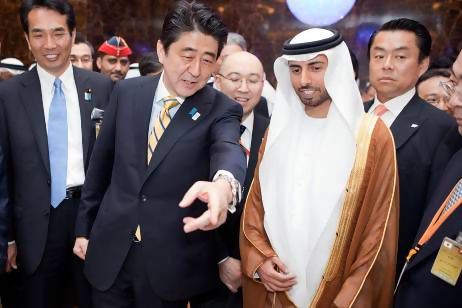 Japan’s Prime Minister, Shinzo Abe, is on a two-day working visit to the United Arab Emirates (UAE) during which nuclear cooperation deal will be signed amongst others. This visit could probably lead to the use of Japanese technology in the four ongoing nuclear reactors being built in Barakah.
UAE’s permanent representative to the International Atomic Energy Agency, Hamad Al Kaabi, said cooperation will govern in the area of peaceful nuclear energy and related applications but “it does not preclude specific commercial deals.” Japan becomes the 9th country to be UAE’s nuclear partner since it began the program in 2009. Most of the Gulf country’s partners are from Europe or North Africa, and many see the recent agreement as a decentralization of its policies.
Economic and trade ties were also discussed and the Japanese prime minister has showed interest in promoting investments in advanced industrial projects and renewable energy. Prime Minister Abe challenged the UAE to follow the footsteps of Japan’s water-saving technology which has been able to reduce water leakage from 33% to 3% in less than 50 years.
The visit has made Japan’s bilateral relations to be more dynamic in the region. It is willing to be active with Middle East countries in general and Tomohiko Taniguchi, a counselor in Prime Minister Abe’s office, said it will “no more” be about buying oil. He assured that their policies in the region will “dramatically expand it in multilateral ways.” Prime Minister Abe will be continuing on with his tour to Turkey where he is expected to sign a nuclear agreement.