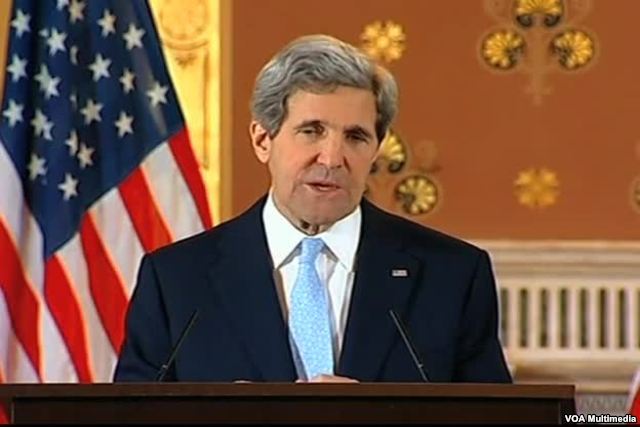 Officials of the Arab league have held talks with US Secretary of State John Kerry at the Blair House, over issues surrounding the Middle East peace process and regional disturbances they are facing. The meeting which was attended by many ministers was described by Kerry as “an opportunity to be able to talk frankly.” One of American government’s all-time concerns is the Israeli-Palestinian conflict.
Shortly after the meeting which was also partly attended by Vice President Joe Biden, Kerry said he “underscored the Arab League’s very important role.” The parties at the meeting have agreed to support the proposed Arab League peace initiative made in 2002, which wants Israel to cede the land it took during the 1967 war and accept a “just solution” for Palestinian refugees in exchange for a full Arab recognition. The proposal was refused by Israel 11years ago because it wants to keep the land it has conquered from the war, rejected the idea of making East Jerusalem a Palestinian state, and the return of refugees to where it has established its colonies.
The head of the Arab League delegation, Qatari Prime Minister Sheikh Hamad bin Jassim Al Thani, who also chairs the Arab Peace Initiative follow-up committee said the conflict is “a strategic choice for the Arab states.” Arab states have refused to recognize Israel as a state. Countries like Egypt, Syria and Jordan did go to war with the Jewish state and some of them are still technically in war with only a treaty binding the peace between them.
Deputy acting State Department spokesman Patrick Ventrell, ruled out proposals being made by Kerry and acknowledged the Arab league’s “eagerness to play a constructive role in the pursuit of a durable and lasting Middle East peace.”