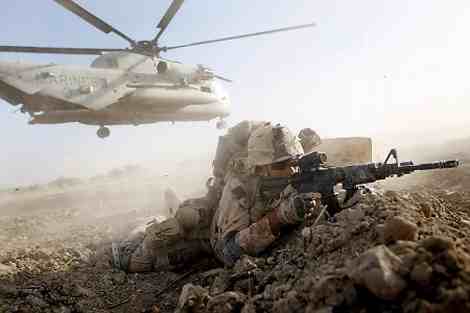 The Pentagon is deploying a new rapid reaction force in Spain tasked with protecting U.S. citizens, officials, diplomats or compounds in Africa in case of assaults or threats.
The move was made in the aftermath of the attack on the US consulate in Benghazi, Libya, in September 2012 that killed four US citizens, including the US ambassador to Libya, Chris Stevens.
After the Spanish Government authorized the force deployment for a one-year period under a 1988 Spanish-US cooperation agreement, the first elements of the task force, made up of some 500 Marines, started arriving in the Spanish Moron Air Base.
The base located in southern Spain provides easy access especially to northwestern Africa, CNN reported quoting a Pentagon official.
However according to the Stars and Stripes publication, the Marines will be settled in Moron base only temporarily and may be moved to other bases in Spain or even in Africa.
According to the pentagon official, the task force will intervene to protect US diplomatic missions and citizens in case of attacks, participate in any evacuation operation, and assist and rescue other US military whenever necessary.
The force, including intelligence and communications specialists, is equipped with machines guns, mortars and grenade launchers and has at its disposal eight U.S. specific aircraft that can fly the unit elements without delay.
The U.S. Embassy in Madrid said that “following the tragedy in the Libyan city of Benghazi,” where four U.S. citizens were killed, the U.S. recognized the need for a force able to respond quickly to crises in northwest Africa.
Some press reports have however underlined that the task force has been specially set up to intervene in Algeria where a collapse of the regime is, according to these reports, “imminent.”