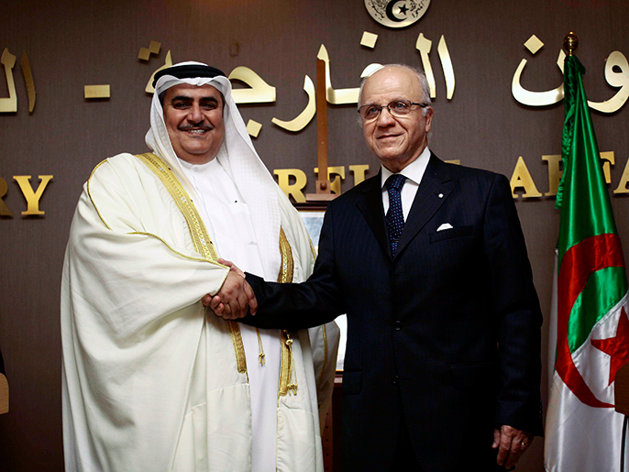 Bahrain’s foreign minister is on a two-day working visit to Algeria aimed at strengthening the bilateral cooperation between Manama and Algeirs. The visit was prompted by an invitation from Algiers. He met with his Algerian homologue, Mourad Medelci, to discuss bilateral relations and cooperation between the two countries.
At the end of his visit which began on Sunday, foreign minister Khalifa and Mourad Medelci, Algeria’s foreign affairs minister, held a joint press conference to announce the plans that they have agreed to work on.
The Algero-Bahraini joint committee which meets once a year will be revived to make it more dynamic and it will be holding a meeting in Bahrain before the end of the year. The revival of the joint committee is aimed expanding the existing bilateral cooperation between them to other domains.
To promote the success of the expansion program of their cooperation, the two governments are willing to reinforce the political dialogue between them. A memorandum of understanding was signed shortly before the press conference in order to “guide and ensure the continuation of dialogue between the two countries” in areas of common interest.
Speaking about the ties between them, Minister Sheikh Khaled said they are “exemplary” historical. He added that he will wish to see their relations develop with the opening of the private sector in the two countries because according to him, “the expansion of this cooperation is currently based on the banking sector and other sectors.”
Algeria’s foreign   minister praised the “brotherhood” they share especially on the political front. He pointed out that the expansion of their cooperation beyond the barriers to the banking sector will be “a fruitful experience for both parties.”