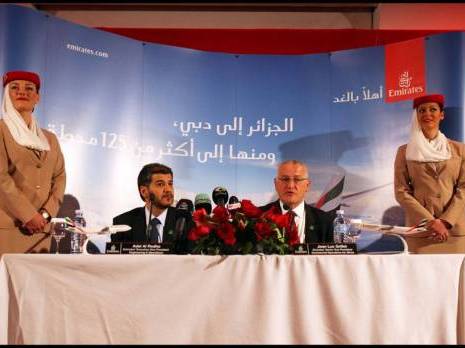 Emirates, one of the leading airline companies in the Middle-east and Gulf region, has launched daily flights connecting Dubai to the Algerian capital, in a move destined to enhance its presence in the North African region and continue to expand its network worldwide.
Emirates operates already daily connections to Morocco’s economic capital city of Casablanca. Algiers is its 22nd destination in Africa, offering passengers new travel options and the possibility to fly non-stop to Dubai, an international hub and a gate to the Middle East, Asian Subcontinent, the Far East and Australasia.
The non-stop service leaves Dubai at 08:45 and arrives in Algiers at 13:30. The return flight leaves Algiers at 15:35, arriving in Dubai at 00:55 the next day. This new route will be serviced by an Airbus 330-200 aircraft, offering three class configurations with 12 tons of belly hold cargo capacity
“We are confident that our new service will play a significant role in supporting the economic growth of Algeria by connecting the country to our worldwide network, opening new conduits for trade, investment and tourism”, said Mr.Adel Al Redha, Emirates Executive Vice President Engineering and Operations.
For his part, Jean Luc Grillet, Emirates’ Senior Vice President Commercial Operations for Africa, said “Algeria is an important economic, commercial and financial centre, with a growing GDP and we are confident that the new service will be a success”.
Emirates currently has a fleet of 198 aircraft, including the world’s largest Boeing 777 and Airbus A380 fleet, and flies to 130 destinations – supported globally by more than 60,000 staff.