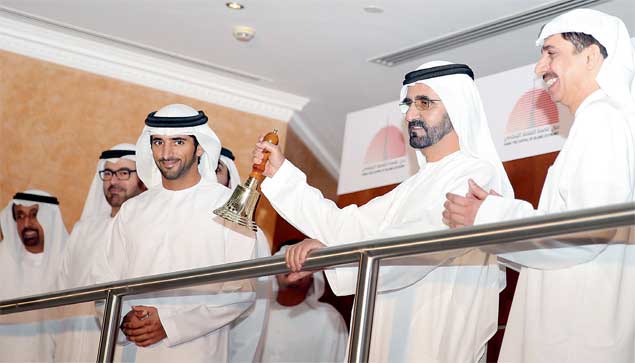 ”Transforming Dubai into a global centre for Islamic Sukuk” is a new initiative that was announced on Wednesday by the emirate’s Ruler Sheikh Mohammed bin Rashid Al Maktoum, Vice-President and Prime Minister of the United Arab Emirates.
The new initiative is meant to position the UAE as a leading economy in the Islamic world, he told the media after he rang a hand bell, symbolizing the launch of trade in the lucrative financial instrument, Sukuk, which is used by corporations and many governments to raise money.
According to some financial experts, the global value of Sukuk in this particular region of the world is worth about $400 billion. The amount may seem very small compared to other international markets but the bond market is steadily growing.
During the ceremony that was held on the trading floor of the Dubai Financial Market, Sheikh Mohammed announced that this is the beginning of a strategy that will make of his country the center of the global Islamic economy.
Since the Sukuk allows generating returns without going against Islamic law, which forbids charging financial interest on loans, he said that the Emirate “follows international standards of Islamic economies and will be the world’s number one centre for Islamic finance.” Some specialists even believe that this sharia-compliant bonds system could have spared western financial institutions the effects of the 2008-09 financial crises they had faced.
According to Essa Kazim the chairman of ‘’Borse Dubai’’, owning the emirate’s financial markets, Dubai has great potential in this trade since it already issues conventional bonds that would have made the city ‘the biggest hub” if they were registered as Sukuk.
The new initiative was warmly welcomed by Nasdaq Dubai that is preparing a trading platform specially designed for Sukuk.